To quote one of the greatest movies* of all time:

“I thought Iceland was covered in ice?”

“No, Greenland is covered in ice. Iceland is very nice!”

With so much to do and see across the country and a lot of open road in between, cruising around in a small home on wheels has become a popular (and cost-efficient) way to explore all the natural treasures Iceland has to offer. Not to mention the freedom of being able to go anywhere you want at any given time and the ability to change your plans at a drop of a hat.

At the time (May 2019) Kuku offered the best value for money in terms of what we were looking for. If you’re travelling light, or making Iceland part of a larger Europe trip, they have all the larger items that won’t fit in your luggage allowance available to rent. Make sure you select a van with heating because Iceland is cold (even in summer) and you’ll need it for a cosier sleep. If you like doing your own research, check out Easy Campers and Happy Campers too.

DAY 1: Pick up your van and hit the ‘Golden Circle’.

Campsite for the night: Fludir

Fly in early if you want to hit the road day one. It’ll take a while to get your van sorted and you’ll also need time to hit the supermarkets and stock up. Buy more food than you think you’ll need because supermarkets don’t come by very often and eating out is expensive. Once you’re ready, set off to see the ‘big three’ just outside of Reykjavik. The National Park will give you a taste of Iceland’s history, the Geysir will blow your socks off (literally – it’s a huge geothermal blowhole) and the view of the multi-level waterfall that is Gullfoss is the perfect way to round off your first day. 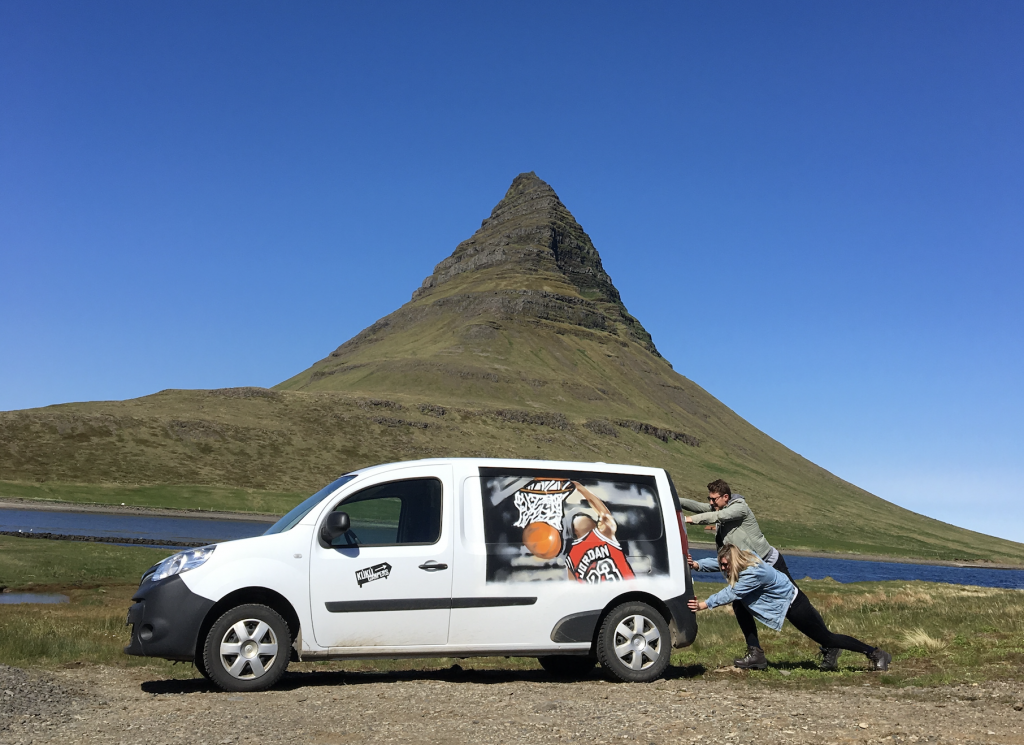 Campsite for the night: Kirkjubaer II

There are more waterfalls than supermarkets in Iceland and you’ll run out of TLC jokes pretty quick. Pop on your waterproof jacket and walk behind Seljalandsfoss before strolling over to its neighbour Gljúfrabúi, found in a cave. Then jump back in the van to head to the almighty Skogafoss.

If you’re feeling peckish, the red food truck on your way out (Mia’s Country Van) makes a delicious fish and chips for not too bad of a price.  Just down the road, you’ll find the notorious plane crash by the beach. Only do this if you’re up for a 7km walk (about one and a half hours there and back) down a boring, rocky and sandy road. Or skip it and head straight to the black beaches for your first look at volcanic sand. If you’re still full of energy at this point, make Yoda Cave your final stop. It’s not so touristy so there’s a high chance you’ll have it to yourself and be able to take plenty of terrible photos. 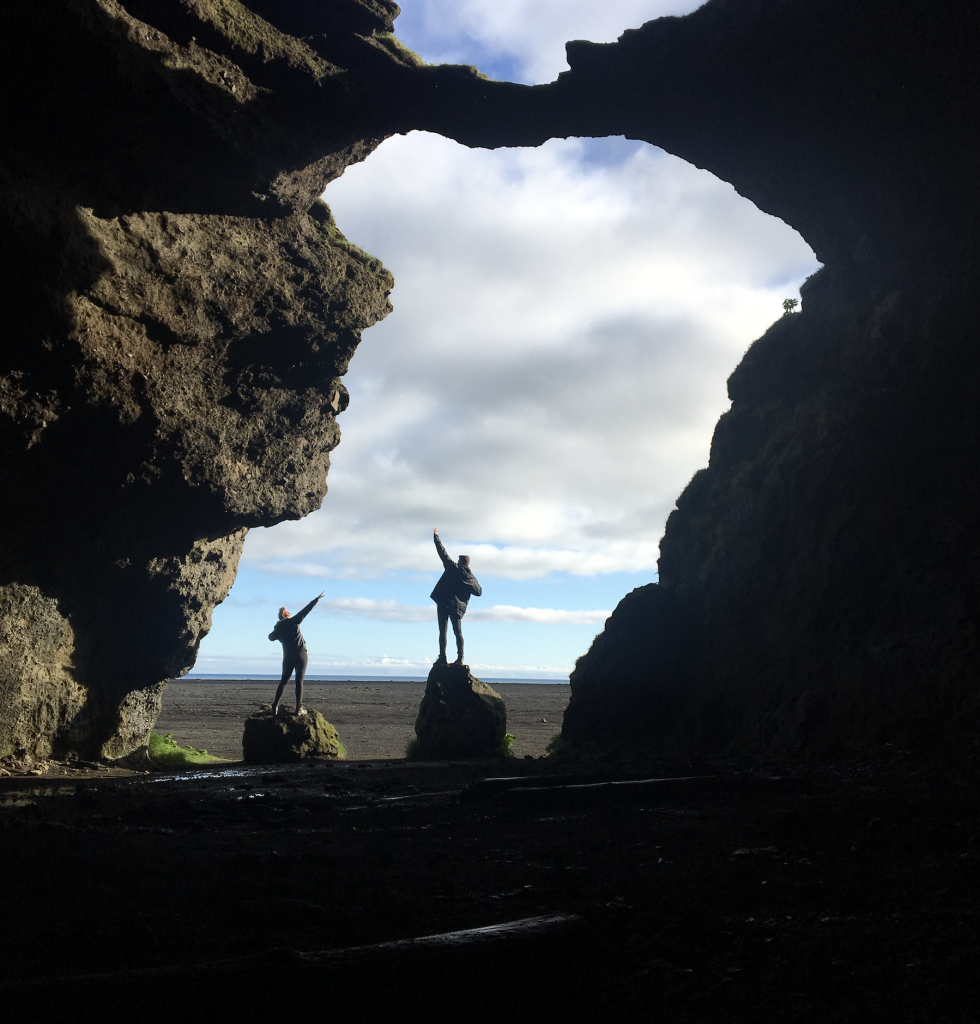 Campsite for the night: Fossardular

While Iceland isn’t entirely covered in ice, 13% or so of it definitely is, taken up by Europe’s largest glacier. The giant icebergs that break off it can be found in the lagoons surrounding its base and makes for some pretty amazing photos. Plus you might spot a seal swimming around. On the opposite side of the road, you’ll find Diamond Beach, which is where the icebergs eventually wash up. The contrast between the black sand and sparkling ice chunks (large and small) make this a spectacular stop. As you head to the campsite for the night you’ll be travelling through the eastern fjords, with amazing mountain scenery at every corner. Give yourself plenty of time and stop for supplies at Hofn if needed. 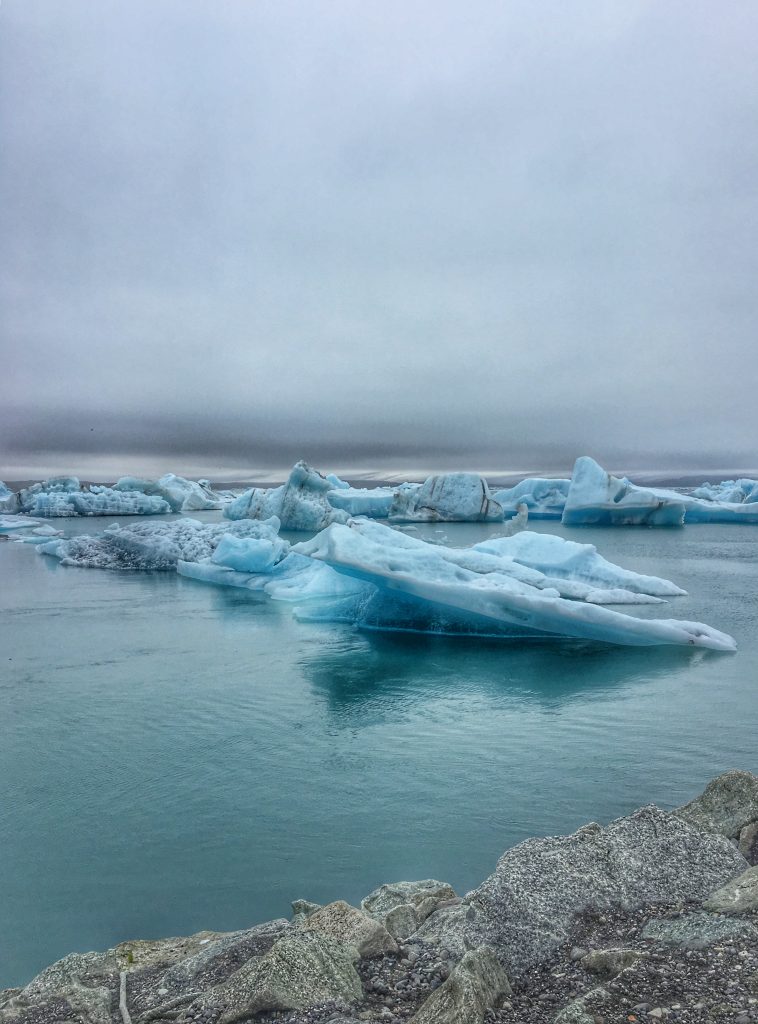 Campsite for the night: Camping 66.12 north

If you’re thinking this itinerary is pretty full on so far, don’t worry, things start to slow down the further you get from Reykjavík. And you’ll notice the traffic petering out too. The gravel roads that lead you to Eggilslatoir (a good supermarket pit stop) and onwards to Dettifoss (Europe’s most powerful waterfall) can be tricky so take it slow. Once you’re done marvelling at yet another waterfall, embrace the fresh air on your drive before blocking your nose as you arrive at the stinky mud pots of Hvevir. A quick drive around the corner and you can poke your head into the natural spa cave of Grjótagjá, before walking around the crater of Hverfjall volcano, which looks out over an impressive view of the MyVatn lake.

Campsite for the night:  Hamrar (excellent common room with plenty of charging points for your devices)

Husavik is known as the ‘whale watching capital’ of Iceland, so if you’re yet to witness these majestic beasts in their natural habitat, you’ll definitely want to hitch a ride aboard one of the boats for a couple of hours. And if you’re yet to see a puffin either, North Sailing offer a combined tour. For a more budget-friendly or whale-less activity, head to the MyVatn Baths instead and soak away the stress of campervan life for a few hours before jumping back on the road and heading to Akureyri.

Campsite for the night: Camping Dalakot

Ayureki is considered the ‘capital of the north’, so if you’ve been craving a decent cup of coffee or Dominos, you’ll find it here. It’s also an incredibly cute town; even the stop signals at traffic lights are love hearts. Head to the Botanic Gardens for a picnic before a big half day of driving. Make a pitstop at Hvitserkur, a giant black rock formation in the ocean that looks incredible on a clear day. 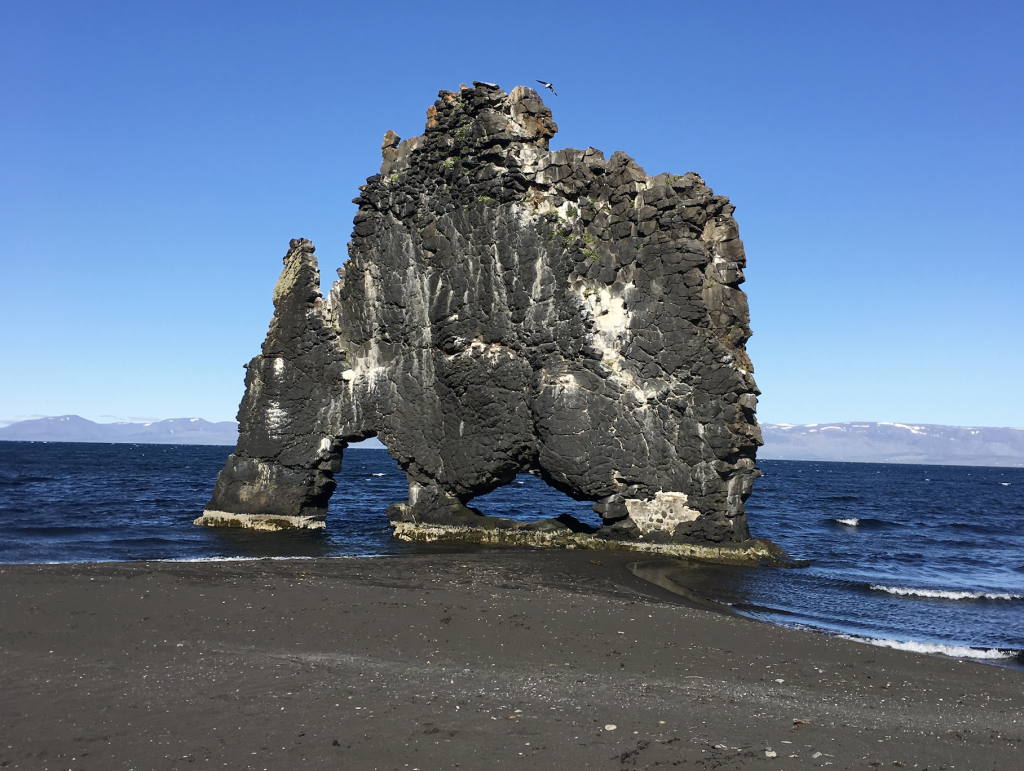 Campsite for the night: Mosskogar camping

Kirkjufell is a pyramid-like green mountain by the sea that provides an excellent backdrop for your campervan photos. It also has a waterfall (I know, shocker) right next to it. On your way to more rock formations at Hellnar, you can go via a ravine and it’s up to you how far up river you walk. After a quick pit stop at the black church (literally two seconds is all you need), head to the rocks at Ytri Tunga. It might take a while to spot them among boulders of the same colour, but you’re bound to find a few seals sunbaking here. And it won’t cost you a cent. Then you can start making your way back toward Reykjavik. 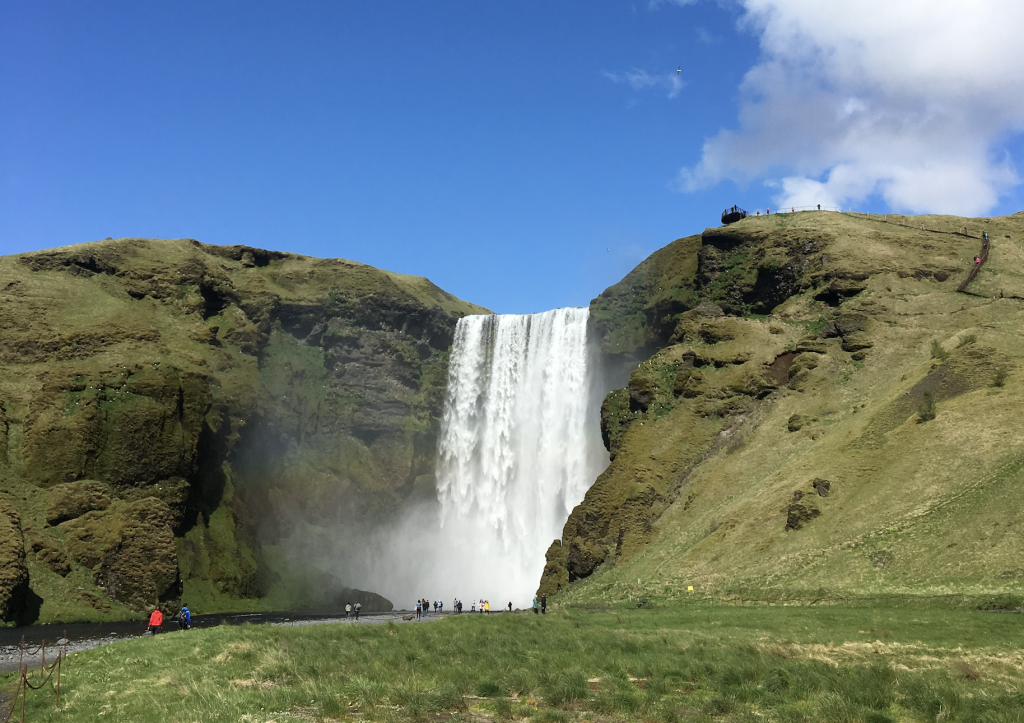 Map your route: Type in ‘free parking’ to Google Maps near Rekjavik and you’ll find a big lot right near the harbour. You can park here all day and explore the capital on foot before heading to the Blue Lagoon.

Campsite for the night: Hafnarfjörður Camping – just a few minutes drive from KuKu campers for an easy return the next morning.

Use your day in the country’s capital to see h60% of the population lives, try some local delicacies (mashed fish anyone?) and pick up those last minute postcards. Compared to cities like Sydney and London, Reykjavik is super chilled. If the sun is on your side, you could also spend the day at the geothermal beach (it’s free) before heading back to the harbour for some famous Vagninn Fish & Chips. The Blue Lagoon is on most people’s bucket list, so if you’re keen to cross it off before leaving, head here in the evening. It’s a lot less busy after 7pm and the entry is cheaper too. Take in your toiletries so you can utilise the showers afterwards and save yourself using the not-as-classy toilet blocks back at the campsite. You’re welcome. 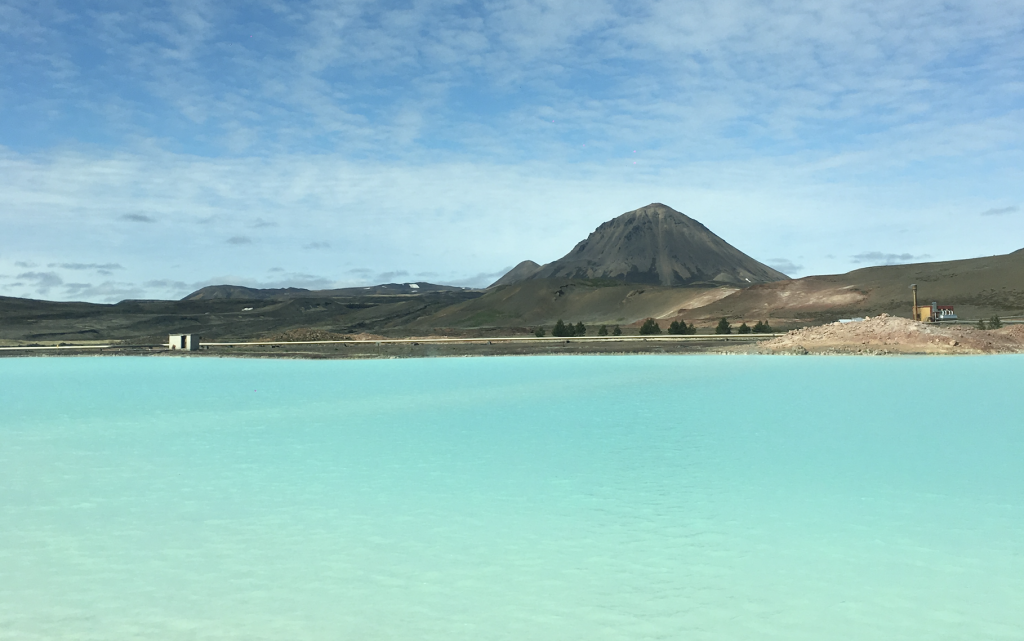 DAY 9: Cry as you realise one of the greatest trips of your life is over.