It was my first time at Coachella and there were oodles of things to do,  here’s an alphabetical breakdown of everything that happened and everything you need to know if you’re thinking about going next year!

The only word to describe Coachella is AMAZING. It’s hectic, it’s crazy packed, the lines are fucked, the prices high – but it honestly has the best vibes and everyone is in a good mood (this may or may not have something to do with LSD but whatevs).  We were there under a work capacity only, so I imagine going without the quest of ‘sick content’ would be completely different. But regardless, I went with an amazing, hard-working team who all knew how to laugh away every stressful sitch. And that in itself, is pretty dang amazing 💛🤗

Bumbags or ‘fanny packs’ as the Americans call them, were rocked left right and centre at Coachella and I could not be happier they are trendy again. Reasons why bumbags are the shit: a) they house your things leaving shoulders and hands free to wave around, c) they cover your gunt, and c) no one can try to thieve anything from you because if they got caught they’d be up for theft AND sexual assault (you know, given it’s in close proximity to your…. well your fanny).

There were celebs EVERYWHERE. Legit everywhere. V.I.P had more familiar faces than a top-tiered awards show.  From the Hadid sisters chillin’ with Kendal; to Alessandra Ambrosio and fellow VS superstars groovin’ next to me; the Stranger Things and Riverdale casts were out in cute lil’ gangs; and Bella Thorne was a hilariously loose unit.

You are the dust. The dust is you. The dust is everywhere. It coats your clothes, it embeds itself in your pores and it finds its way up your nostrils causing more nosebleeds than a crack kween.

Ever since I was an angsty teen listening to Curtain Call on repeat, I have been a huge Eminem fan. I’m that girl who is white and tame AF but put Without Me on and I’ll rap the shit out of it word for word. #BasicBitch The headline act on the last night closed the show and I will never forget laughing so much at the entire crowd grinning their way through ‘I’ll fucking kill you’ while bopping around as if it were an upbeat pop song.

My feet were FUCKED after only a few hours AND I’d worn my boots in. We walked over 17kms that day and the bottom of my feet looked like I’d somehow stumbled over burning hot coals. There were blisters on the SOLES of my feet, not just the side, the SOLES. I could not walk properly and a week later, am still hobbling a wee bit.

Coachella isn’t just about the fashion, it’s about the glam factor too. Think sequins, glitter everywhere, braids, elaborate makeup – it’s one of the only non-photoshoot times in a gals life they can go extra AF with their hair and makeup. 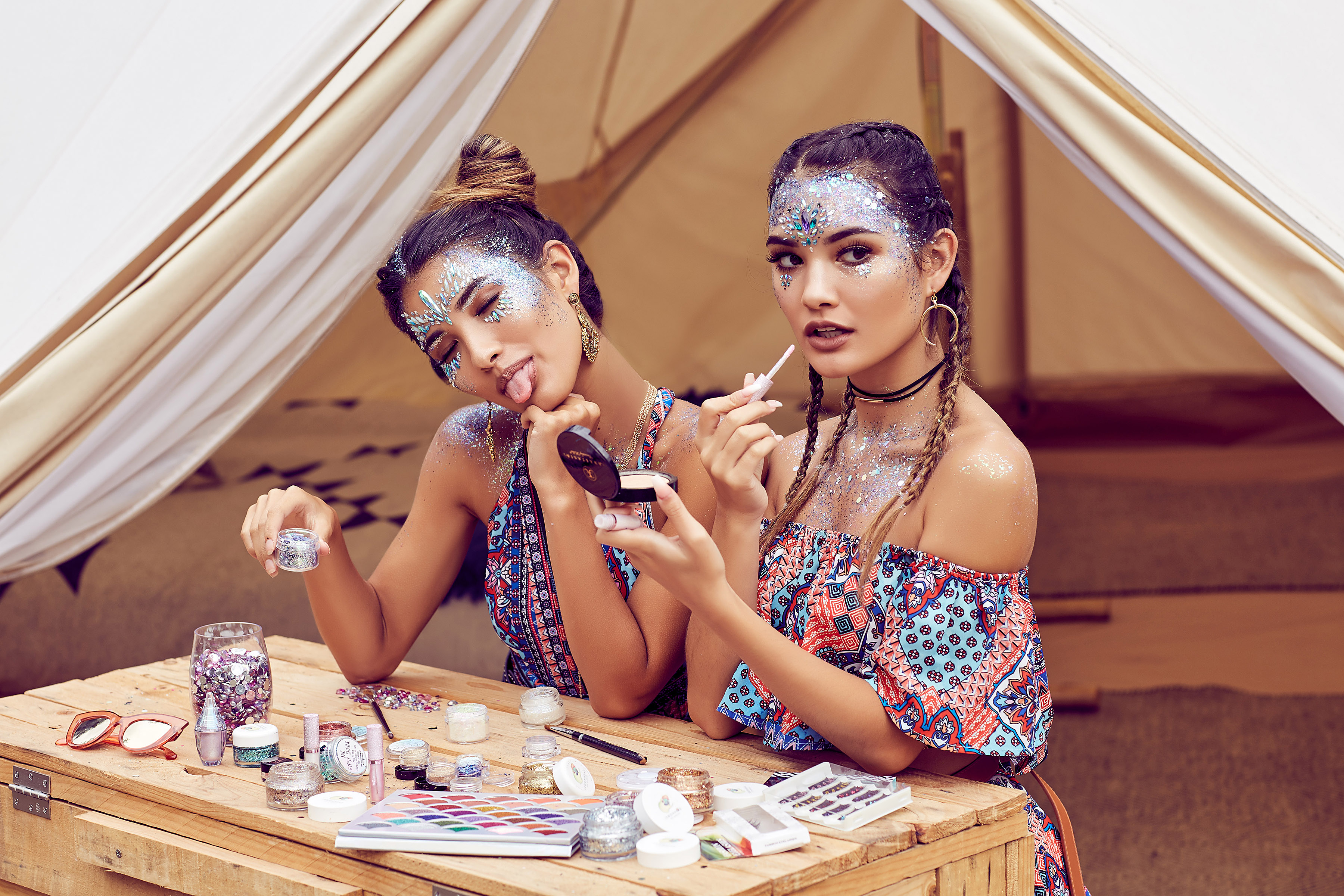 We were lucky enough to have booked a house (through Air BnB) that was walking distance to the festival – don’t get me wrong, it was a long ass walk (spesh when you’re feet are ruined) BUT it was way better than the alternative, which was pay a ridiculous amount for ubers (surging x 20 PLUS a 3 hr wait) or have organised a bus.  Some of the funniest memories are from that walk… there was one morning when one of the models started crying because she needed to wee so much (major lolz) and on the last night, as I was traipsing back across the golf course, a lovely chap controlling the sprinklers decided to turn one on completely blasting me. Well played sir.

Influencers, influencers everywhere, influencers as far as the eye could see. I would hazard a pretty accurate guess that the majority of top influencers were loitering around the ferris wheel at sunset on the first day.

Speaking of Kygo, I was strangely attracted to him on stage and then googled him after saying as much and seeing my boss give me a funny look and then realising why as he is a bit too androgynous for my general taste. BUT, in my defence, I was watching him from afar and there was the whole DJ thing going on and the backward cap thing that makes me feel 16 with a crush again… ya feel me?

I couldn’t choose between ‘lights‘ and ‘lines‘ for L so I’ll quickly touch on both 😝 The colours and lights emanating from the palm trees and buildings were magical, so so pretty, Coachella was prettier at night but alas, pics just don’t do it justice so I can’t show you! The lines were fucked which is standard at any festival or big event.

So I wasn’t actually aware of this but marijuana is legal in California and everyone bloody LOVES the stuff. You walk around in a perpetual plume of smoke and on the one hand, I’m breathing in and trying to get high ‘accidentally’ cos’ you can’t get in trouble from yo’ boss if it’s passive amirite?! And on the other hand, it’s really annoying to wash your hair everyday cos’ it smells like a legit bong.

We were lucky enough to score invites to Neon Carnival, which is the ‘MUST ATTEND’ Coachella after party on the Saturday night that all the celebs go to. Alas, by the time we got home and had sent the content back to AU it was almost 3am and so we opted for bed much to the disgust of our underage models who would have killed to go.

Coachella outfit prep began early March and as we got closer, we had styling meetings once per week with our talented stylist. Our models were, of course, her priority but she did a PHENOM job on everyone’s look and it was no easy feat with 7 girls of all different shapes.

I always thought that Coachella was in Palm Springs but it’s actually a good 40 min drive. And that’s without a 3hr wait for surging ubers and insane traffic. The only way to stay in PS and not want to sit in the dust and burst into tears is by organising a driver or bus. Most of the parties are in Palm Springs and it’s such a cute place (check out this article about stuff to do there) so I can totally see the appeal but for us, it was so much easier to be walking distance in Indio! 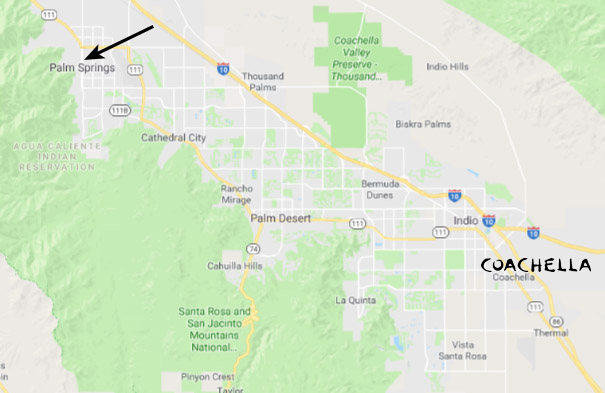 The most talked about moment of Coachella 2018 was when Queen Bey headlined on the Saturday night, with a performance so powerful ‘Beychella’ was trending across all social platforms. It was the most carefully planned and executed show I’ve seen and no detail was left unplanned, her team as a whole are so damn talented, it’s amazing. And I mean the Destiny’s Child reunion? I 100% cried. It was phenom.

When you first get to Coachella, the best thing to do is have a nice roam about the grounds to get your bearings and figure out where TF everything is. It will make things MUCH easier when it’s packed, dark and you’re drunk I promise!

So many peeps were winging about the intense security but I thought it was awesome. In the state the world is today, I was so grateful for the multiple security checkpoints entering the festival. Metal detectors, pat downs, bag searches – you name it and the team had it covered.  It was the first major event I’ve ever been to though that didn’t have sniffer dogs. While they’re not going to openly high-five you if you’re walking in with a bag of MD sitting in your bag, everyone who works at Coachella seems to acknowledge that festival goers will be taking drugs so they kinda just seem to accept it!

Although it may appear that the majority of peeps go to Coachella for the mandatory ferris wheel pic, the tunes are technically the primary point of the 3-day long soiree.  Coachella is such a big deal for performers so my word, they make it count. Generally, when we see artists perform in Aus, it’s after a long tour and they’re over it. But everyone clearly wanted to be there and had a bloody ball on stage.

Guys and gals, you’re in the desert, pre-drinking like you’ve never pre-gamed before in an attempt to avoid the hefty bar lines and $13 bevs. It’s safe to assume you’re under the influence and the number of youngins I saw passed out, lying in their own vomit, or just sitting solo in the upright foetal position was crazy.  Yes, getting drunk is fun but for the love of your dignity, drink some damn water and slow TF down. You can’t enjoy anything when you’re passed out so stop being a hero and learn how to say no to a 5th beer bong.

I’m not sure I could go G.A after experiencing Coachella for the first time in V.I.P 🙈 I know that sounds horribly snobby but for someone who hates crowds and overreacts majorly at the sight of long ass line – it was the best way to experience it! Perks of V.I.P tickets were separate entry/exit points with MUCH smaller lines; specific V.I.P only areas that were much more chilled and had great vantage points for stages; shorter lines for drinks, food and the loo; and FAR nicer loos, if portaloos make you gag, there were plenty of ‘luxe’ toilets. As someone aptly pointed out, bar the celebs and influencers and celebs, V.I.P was mostly made up of Aussies – when you’re travelling that far and spending that much, a few extra hundred is worth it.

So every single pre-party, after-party, activation and certain hotels require a specific wristband for entry. That you’re not allowed to take off. Then there’s the actual Coachella wristband and daily drinking 21+ wristbands. Your wrists look ridiculous. For some, it’s like a badge of honour, and they walk around with expired wristbands for parties that were yesterday. They ruined my outfits so I took them off at the first possible chance 🤨

The Yodelling Walmart Kid performed on the Sahara Stage and if that doesn’t showcase the power and impact viral content can make, nothing ever will!

As much as I’d love to be one of those chic lasses who have a tailored and carefully curated wardrobe, full of basic pieces and muted tones in quality fabrics – I am the furthest thing from it. I love colour, prints, sequins, tassels, OTT earrings, faux fur like a magpie nesting. So seeing 80% of festival goers dressed X-TRA AF was ridiculous amounts of fun for me. When asked what I loved the most about Coachella, ‘people watching’ was in my top 5.

We averaged about 5 hours of sleep per night and after such huge days, it feels even less. I was in desperate need of catching up on some ZsZsZs 😴😴😴😴 so enjoyed my 16-hour nap on my way back to Syd.