In January last year, reality TV star and real estate mogul (and ultimate #tanningfail) Donald Trump was sworn in as the President of the United States. And his first year as Commander in Chief has been a doozy since day one, with scandals, crises, controversy and drama – most of which has been generated by the Prez himself.

Now, the guy has a looong history of saying and doing offensive/ridiculous/outrageous things. But since we have other things to do, we’re just going to look at the times he’s been batshit during his presidency.

Let’s start with his inauguration, shall we? On January 20, 2017, Trump officially took office and gave a speech pledging to put “America first.” The problem is, not many people showed up to hear it. The Trump administration claimed the inaugurated had attracted “the largest audience ever to witness an inauguration, period” – but the crowd was a third of the size of Obama’s eight years earlier. We’ll just leave this pic here. 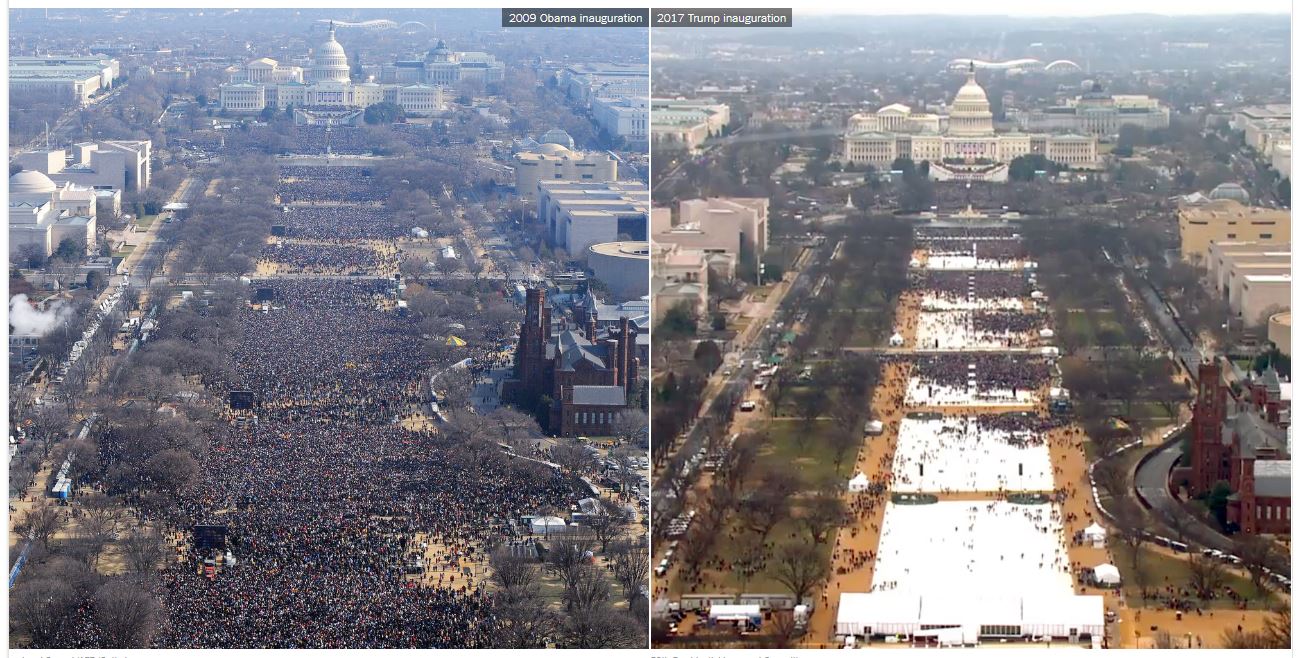 Courtesy of the NY Times.

And since we still have royal wedding fever, JK Rowling used this comparison over the weekend. Bow down, bow down. 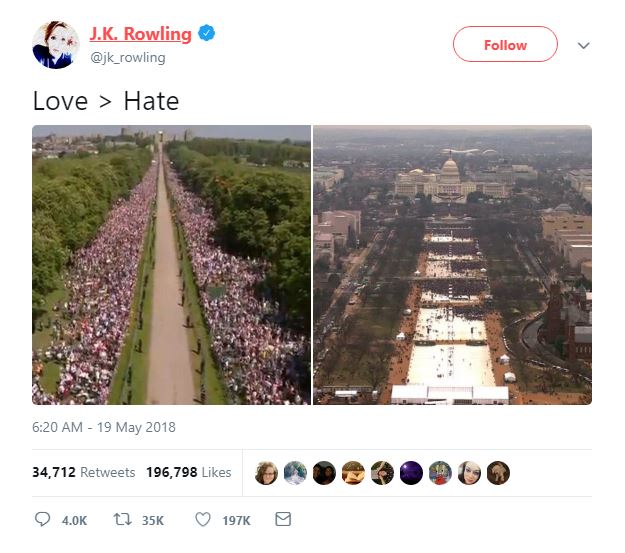 #2 The time he hung up on our Prime Minister… 🤨

A week into his presidency, Trump hopped on the phone with the PM of one of America’s longstanding and most loyal allies: Australia. The call with Malcolm Turnbull was meant to go for an hour. Instead, Trump bragged about his electoral college win and ranted about a deal Obama had made with Australia about taking in a teeny number of refugees. Malcy tried to calmly explain the sitch, til Trump blew up, saying “I have had it. I have been making these calls all day and this is the most unpleasant call all day. Putin was a pleasant call. This is ridiculous.” So just to recap: he said he much preferred talking to the Russian president – whose country has been an American enemy for decades – and then hung up.

At a rally in Ohio, Trump ranked himself as the second most “presidential” person to occupy the White House, after Abraham Lincoln. Trump comparing himself to Abe (who was President from 1861-1865) has become a bit of a trend, but this comment is even crazier when you consider the presidents who came after him, and everything they did for the country: George Washington, Thomas Jefferson, Franklin Roosevelt, John F Kennedy…

#4 The many, many times he lashed out on Twitter… 🤯

First of all, the fact that the President – rather than a strict press secretary – handles his own Twitter account is wild. And the fact that his rants are as controversial as Yeezy’s makes it even more batshit. With exclamation points aplenty, ALL CAPS and spelling errors, his tweets are instant reactions to what’s happening in the White House. They give us an insight into Trump’s mind, and what he’s thinking and raging about. And in turn, they’ve made the presidency more about his personality, rather than his policies. 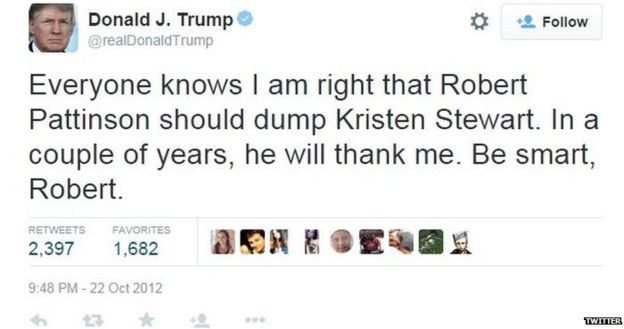 These are some examples of his scandalous use of social media:

#5 The time he complimented a military dictator’s shoes…😑

On a whirlwind tour of the Middle East, Trump met Egyptian President Abdel Fattah el-Sisi. A bit of background: the guy overthrew his country’s elected president in a 2013 coup, and has killed and put tens of thousands of protesters into prison since. During the meeting, Trump’s eyes were darting to the floor, to Sisi’s shoes. As he was leaving, said, “Love your shoes. Boy, those shoes…”

The shoes in question? Black boots.

Once upon a time, The Prez and First Lady, Melania, travelled to Paris for Trump’s first-ever meeting with the President of France, Emmanuel Macron. They shook hands, then Trump took a creepy step back to look Brigitte Macron up and down, saying “You’re in such good shape.” He didn’t stop there. He then turned to her husband and repeated, “She’s in such good physical shape.” Inappropriate, much?

#7 The time he wanted fewer immigrants from “shithole countries”…😤

Yep, you read that right. During meeting with lawmakers at the White House, Trump rejected an immigration proposal. It happened behind closed doors, but Illinois Senator Dick Durban – who was there – was so mind-boggled, he relayed the words that came out of the President’s mouth to the press. Apparently, Trump said he’d rather have more immigrants from Norway and fewer from “shithole countries” like Africa, El Salvador and Haiti. Can’t deal.

#8 The time he instituted a travel ban…😠

It’s still hard to believe this happened. In his first month as President, Trump signed an executive order banning citizens from Iraq, Syria, Iran, Libya, Somalia, Sudan and Yemen from entering the country for 90 days. He basically branded every single person from those countries a terrorist, and left hundreds of Americans stranded in the process – some of whom had been living here for years. As you can imagine, mass protests broke out in airports, and the ban was overturned by a federal judge.

#9 The time he trolled the North Korean dictator…😦

Trump and Kim Jong Un have a tense relationship. In response to North Korea testing nuclear missiles, the Prez threatened to unleash “fire and fury like the world has never seen” if it put the US in danger. Wonderful. Then Trump called the dictator a “little Rocket Man” and his government “a band of criminals,’ and the later added Jong Un was “short and fat.” Can you not?!

#10 The time he shoved the prime minister of Montenegro…🤔

We told you we couldn’t make this stuff up! A few months after he was elected, Trump attended his first NATO summit, which brings together military leaders around the world. At one point, the heads of state all gathered to take a group photo, and Trump found himself in the middle of the pack. That simply wouldn’t do, so he pushed Prime Minister Dusko Markovic of Montenegro out of the way so he could be at the front. Then adjusted his suit jacket like it ain’t no thing.

And on a light-hearted note, Trump hosted TIME reporters at a private dinner at the White House, where he was served two scoops of ice-cream. Everyone else got one.