It’s been a big week for love. Shawn and Camila might be dating. Tana and Jake might be married. James Charles might be in love with himself. Love Island might be over but thankfully we’ve got The Bachelor to fill the void in our hearts.

If you missed any of that this week because you’re still scratching your head trying to work out what Gemini’s have to do with astrophysicists, worry not. We’ve unpacked everything you need to know about love in the limelight this week.

Try to keep your pants on while we break this news, but Camila Cabello and Shawn Mendes are making all your Senorita wet dreams come true by actually dating. In real life. And no, our evidence is not just a couple of flirty tweets and a blurry vid of them holding hands. We present to you, Shawn and Camila macking on IN THE DANG OCEAN.

If, like my boss Kelly, you have no idea who either of these people is, first of all, shame on you. Second of all, go on the internet once in a while.

Shawn and Camila released their super-steamy single, Senorita, earlier this year and ever since the video dropped, the internet has been rife with dating rumours. I don’t care what your job is. You don’t have that much chemistry on camera and then just be super chill off-camera.

Naturally, both of the popstars have been quite coy about the whole ‘are they/aren’t they’ speculation. So much, in fact, Shawn outright walked off stage during a Q and A when he was asked about his leading lass.

A mystery source (pesky little fellow) told E! News that the pair already feel “like they’ve been together for a lot longer than they have. They’ve known each other and been a part of each other’s lives for a while so it’s all very natural and moving quickly…They haven’t wanted to be apart at all. It’s 24/7 and all out at this point.”

Sounds exactly like one Mr Justin Bieber and the now Hailey Bieber last summer if you ask me. Just sayin’.

But, before you go saving the date for their wedding and naming their future children, you might want to pump the breaks. For every tweet and paparazzi pic that suggests the couple is dating, there’s another speculating it’s all a ‘promance’ (a PR romance, duh). 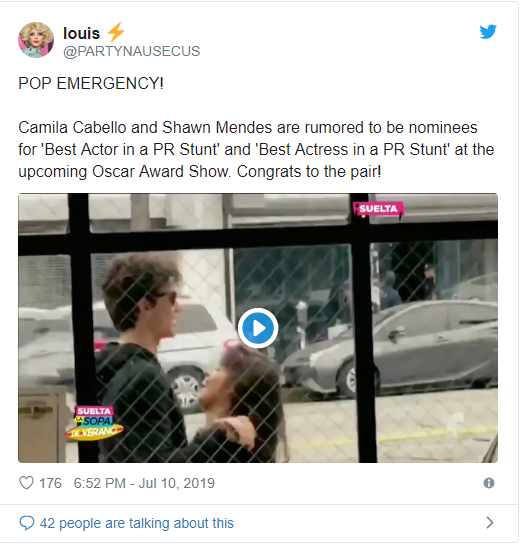 More in potential #FakeNews, YouTube’s royal couple has finally tied the knot. If you think I’m being sarcastic when I say finally, you’re spot on. Tana Mongeau, 21, and Jake Paul, 22, have been dating for a grand total of two months before getting hitched.

i’m probably gonna be posting wedding photos longer than we’re married for but i felt like i had to start with these- these photos were taken minutes after someone literally threw an entire drink at us at the fucking altar. obviously, like everything happening at this wedding- that wasn’t apart of my plan (or any ideal for a regular wedding). but somehow amidst all of the chaos and cameras, we grabbed eachother’s faces and the second we both locked eyes and smiled… it made it all better. everything was okay. if not, better. it kinda set the tone for everything we’ll go through together. probably not easy, or conventional, but throughout all of the chaos, if we can just grab eachother, the world stops spinning for a second. i’m never really prepared for what might be thrown at us but i’m happy i get to deal with it with my best friend by my side. it’s a beautiful thing that every single time someone wants to take the power away from us and put us down, we are able to come together and let positivity & love help us power through that. i wouldn’t have wanted to marry you in any other unconventional fucked up way, Jake. I love you. 7.28.19. ❤️ (apologies in advance for the amount of pictures i’ll post over the next week)

The wedding reportedly took place in Vegas (though neither of them applied for a marriage license). In attendance were a few family members, a shit tonne of their friends and Logan Paul, Jake’s brother. When asked about his twin brother’s nuptials, Logan told reporters he expects the marriage to last “about a month, a month a half maybe”. Welcome to the family, sis!

Because love is something to be shared with the world, Tana and Jake live-streamed their wedding for fans. Of course, you had to pay US$50 to access the stream and the quality was grainy at best.

The pair apparently left their wedding reception separately, skipping the honeymoon. Jake was seen by fans and reporters heading to a nightclub with a few ladies (none of whom were Tana) on his arm. But you know, whatever works for them I guess?. Besides, with quotes like “I’m probably gonna be posting wedding photos longer than we’re married”, we can’t say we have much faith in the relationship but ya never know what the kids will do for #Clout these days.

James Charles is the most cringe-worthy person on Instagram

ICYMI, James Charles slid into your favourite celebrity’s DMs and hot damn it was SO CRINGE.

In his latest YouTube video, James asked a slew of A-listers for their best ever make up recommendations and while most of them came through with some solid recommendations. Holy shit, the messages they replied to were awkward AF.

I mean he started by calling Kim Kardashian “mom” and finished by asking Shawn Mendes for a setting spray recommendation. Doesn’t he know Shawn is too busy locking lips with Camila Cabello to check his phone? He also consulted Lil Nas X, because, and I quote, “taking horses to the old town road sounds like a very rigorous sport”. Give me a break.

If you want to watch the whole video, we’ve linked it below. However, it’ll save you a lot of time (and pain) to get the TLDR here. 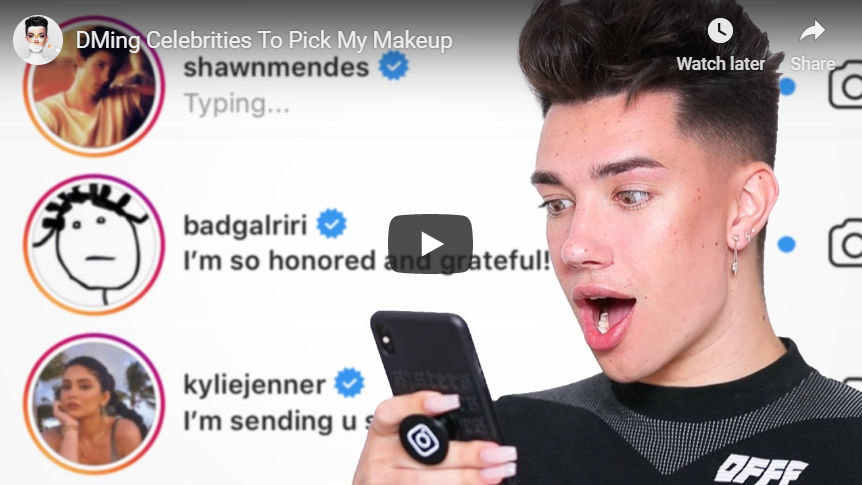 Love Island is over but who TF is Greg?

Before we commit ourselves to the latest season of The Bachelor, we need need to bid farewell to Love Island. This year’s season of ridiculously similar, good-looking Brits all making out and breaking up with each other proved to be the most popular season yet. We fell in love with Ovie, wish we were best friends with Maura and couldn’t get enough of Molly Mae.

❤️👑 THE PERFECT COUPLE 👑❤️ Remember to vote for Greg and Amber TO WIN!!! Voting is free and available on the app! PLEASE PLEASE PLEASE. IT TAKES 30 SECONDS TO VOTE! #Loveisland

However, we have one question left unanswered. Who the hell is Greg? For weeks we’ve been preparing ourself for Maura and Curtis to take home the prize money. But lo and behold, Greg ‘Been Here For 30 Seconds’ O’Shea swooped in and took out the top spot. We love Amber, we’re glad she won too. However, we don’t know anything about Greg, so how does a girl who had no internet access to do an Insta stalk know this is the guy for her?