Look, we’ve already established that 2020 is a truly wild time to be alive. We’re only a fortnight into the new decade and already, we’ve been polarised by Netflix documentaries, found ourselves down a Tik Tok rabbit hole and dealt with the year’s first celebrity heartache. But, now I must ask you to turn your attention away from all of that. It’s with great joy that I can announce, Paris Hilton has her own bloody cooking show. That’s right, a Paris Hilton cooking show. So stop whatever you’re doing (after reading this article, obvi). You’ve got a new favourite YouTube series to watch.

I honestly don’t even know where to start. There’s a cheesy daytime-television style title sequence, the fact her sous chef is a chihuahua named Diamond Baby, her fingerless cooking gloves or the fact she refers to browning meat as giving it a tan.  As I said, it’s a lot.

The video, called Cooking With Paris features Paris herself cooking her so-called “infamous” lasagne. Which is weird because I’m a bonafide cookbook slut and I’ve never heard of this “infamous” lasagne. Although it does use a whopping five tubs of ricotta so I could see myself getting on board.

Every thought I had watching Cooking With Paris

A minute and 31 seconds into the video we know exactly what we need to know about Paris’ attitude to cooking. It’s an inconvenience, an odd choice for someone launching a cooking show IMO.

“You have to be delicate because [lasange sheets] break really easily,” she says as she manically throws them into a pot of boiling water. “Don’t break it in half ’cause it will ruin the lasagne vibe”. TBH if I had a vibe it could definitely be described as a lasagne vibe.

Then we’re treated to a tour of Paris’ many tea towels, my favourite is the one that says ‘allergic to bullshit’ which she proceeds to use to grease a freaking foil tin.

We then get told by Paris to absolutely not do what she’s doing. Apparently the aforementioned five tubs of ricotta is way too much. “Don’t use this much,” says Paris as she proceeds to use exactly that much.

Another piece of sage advice from the new Nigella Lawson is to use shredded mozzarella. If you don’t, she warns, you have to do it yourself.

“I wish this was already shredded,” Paris laments of her rookie error “but whatever, life could be worse”.

That it could Paris, that it absolutely could.

Thankfully watching over Paris throughout this entire debacle is a cookie jar in the shape of Marilyn Monroe.

If you take a drink every time Paris says, “I don’t have the right utensil”, “I’ve never done this before”, “Oh no” or even just groans. You’d be wasted by the time we’re up to “tanning” the meat. Maybe Paris was a little drunk too because after the meet has had its time in the sun, she throws salt all over the kitchen. The only place the salt doesn’t land is in the actual pan.

There’s also a moment where Paris uses 11 cracks of pepper because 11:11 is her favourite time of day. Don’t get me wrong, the satire of this brilliance is not lost on me. However, there is a small part of me that believes Paris is completely serious.

Paris just did a half-time spritz of unicorn mist. Surely this woman is taking the piss out of us all and collecting a bank cheque along the way, right? RIGHT?

“I feel like my lasagne should not have onion or garlic in it,” she tells the 971,211 of us who have already watched it. Well, Paris, I feel like your dish is going to be fucking bland. It’s just cheese, beef, pasta, ready-made sauce and the world’s entire reserve of salt.

If you feel like you’ve lost interest by this point (the 13-minute mark FYI), Paris gets you.

“Lasagne is like, very hard to make. Well actually I don’t think it is, but people think it is. But it’s actually really fun and really easy. But I guess it is a lot of steps compared to like making toast or something.”

If you want to watch this entire rollercoaster ride of a cooking tutorial yourself, catch it below. 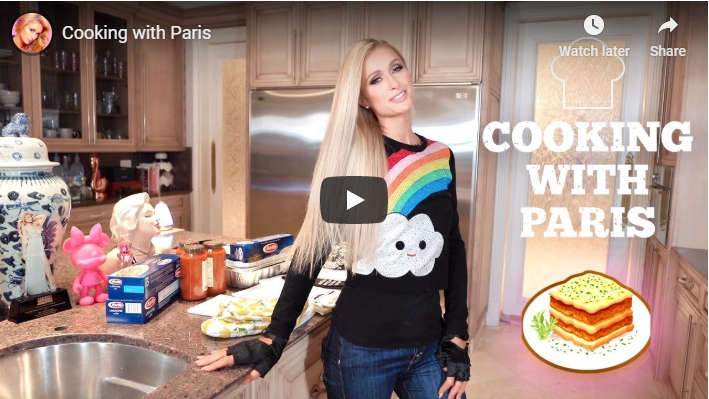