Chances are if you’ve left your house at all this week, or have been on the net, you already know love is dead. A bloody sombre note to kick off this weekly wrap, but it’s the truth. Of course, we’re talking about the Miley Cyrus and Liam Hemsworth breakup 2.0. But more importantly, and perhaps more devastatingly, Harry Styles turned down the role of Prince Eric in the live-action remake of The Little Mermaid. See, I told you. Heartbreaking.

This week wasn’t easy for Gigi Hadid either. In a single Instagram post, the supermodel managed to turn an entire nation against, but more on that later. For now, grab yourself a seat, open a packet of Tim Tams because tea is about to be served.

In tragic, and slightly convoluted news, Miley Cyrus and Liam Hemsworth have separated after 10 years of being together and eight months of being married.

Confirmation of the split came in an exclusive press release given to People Magazine which stated Miley and Liam were “ever-evolving, changing as partners and individuals, [and] have decided this is what’s best while they both focus on themselves and careers”. Which, okay, seems legit.

However, it’s worth noting Liam told GQ Australia he wanted 20 kids in Feb and Miley told just told Elle she wasn’t prepared to bring children into a world “on the brink of ruin”. So there’s that.

What made things even more confusing is that while the news was being broken, Miley was papped making out with Kaitlynn Carter-Jenner (who just split from Hills star Brody Jenner).

Kaitlyn’s ex Brody wasn’t too happy about the pics, writing on Insta, “Watch out! Pics of Liam and I holding hands on the beach coming soon!”. A comment Miley was less than pleased about. “Go take a nap in your truck and cool off #HotGirlSummer,” the pop star wrote in reply.

Liam also threw his two cents in on Insta, but he was noticeably more tame than the others.

Hi all Just a quick note to say that Miley and I have recently separated and I wish her nothing but health and happiness going forward. This is a private matter and I have not made, nor will I be making, any comments to any journalists or media outlets. Any reported quotes attributed to me are false. Peace and Love.

I actually think someone should check on Liam. He’s started appearing in OPSM ads which seems much more of a Luke Hemsworth gig to me.

But you know what? Miley and Liam rekindled after the Wrecking Ball saga of 2013, and *apparently* they don’t plan to legally divorce any time soon. So who knows? They might be back together sooner than we think. Do you know who else thinks they might get back together? Lizzo. On her trip Down Under the singer said she was on the lookout for a Hemsworth of her own but wouldn’t be “messing with Miley’s man”.

It’s never a bad day to be Kylie Jenner. You know, except that one time her BFF hooked up with pretty much her Brother-In-law. However, after seeing the pictures from her OTT Italian birthday soiree, it looks like it’s all behind her, because honey, it’s hard to be sad when you’re celebrating yourself on a $250 million superyacht.

Most of her fam was in attendance including Kris Jenner, Travis Scott, Scott Disick and Sofia Richie. The fact that Kim, Kourtney and Kendall and Khloe were missing though was a fairly good indication that all those surprise wedding rumours had no substance.

She did wear the wedding dress we were all peeping on TMZ though. Jenner wore the white feathered dress to a party on her birthday-eve, before switching it up with a bright pink number for her actual bday.

Not one to pass up a business op, Kylie also released a birthday collection in honour of turning 22. Not gonna lie, it looks pretty damn good, but FFS, how is Stormi Webster, Kylie’s 1-year-old child already more well-travelled than half the people I know.

Greece is not here for Gigi Hadid

There are enough celebrity feuds out there to keep our appetite well and truly whet. We really don’t need any new ones, but of course, they just keep coming. Cardi B and Nikki Minaj, Miley Cyrus and Brody Jenner, Gigi Hadid and the entire nation of Greece.

Yep, in a single Instagram post, Gigi seems to have sparked a heated back and forth with some very proud Greeks. 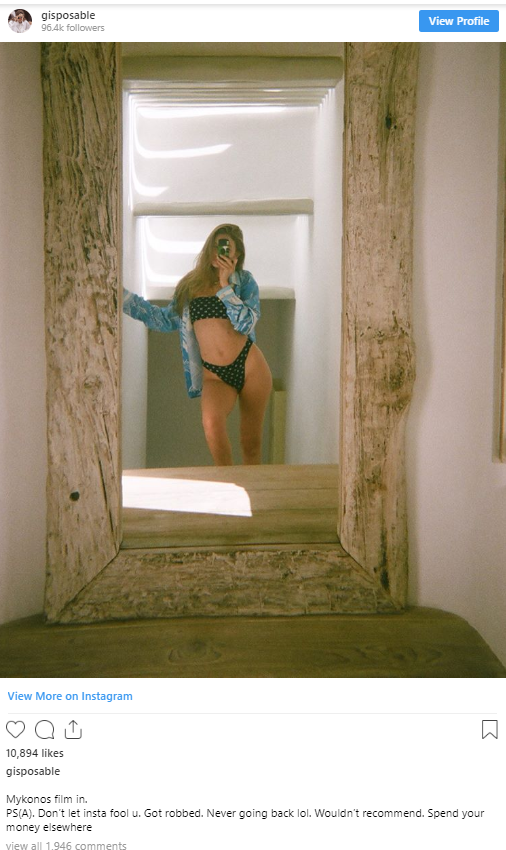 People took huge issue with Gigi’s words writing comments along the lines of, “I got robbed in Miami… I don’t tell people not to go there… stupid post”. Which I don’t know, seems harsh, but Twitter agrees.

Gigi Hadid: I am never going back to Greece

It's understandable that #GigiHadid has been shaken by the break-in, but shaming #Mykonos and telling ppl not to go there is quite shallow when she rushes back to USA, where ppl litterally get killed in the streets every minute. The greek islands are among the safest places to go

“Let me make this clear for everyone below who thinks I don’t deserve to have an opinion on my experience and warn people of this – I was robbed along with more than 30 houses that night, some to gunpoint.

“It was not possible to contact any form of law enforcement except through my local security who happened to have a contact. That is a privilege that most people travelling there wouldn’t have. If something happens while the police station is closed, there is nothing that can be done to protect yourself, and when the station does open, it doesn’t seem as though their training and resources are in line with keeping people safe or keeping up with the amount of crime that is happening on a nightly basis there (I am speaking of the island specifically only because it’s where I experienced this).

“This is not information that is shared with people before they go. If I’d known it happened so much and there was not enough infrastructure to protect myself I wouldn’t have gone. So this is my opinion based on actual events and you not liking that isn’t my problem. Lastly, I work my ass off and never do a trip like this for myself and friends, so if I want to post pictures of the trip after being robbed, I will do so.”

So, end of story?

Celebs have been busted faking their Insta followers

A survey by the Institute of Contemporary Music broke down the Insta-followings of your fave A-listers this week and worked out who had the most amount of fake followers and bots.

Take a moment to decide who you think is at the top of the list. Now, let me crush your expectations. This is who took out top spot:

Go follow @EDbyEllen! If they hit 1M followers, one follower is gonna win a $1,000 EDbyEllen gift card! I’m so excited, I fell off the couch.

Yup, talk show host queen and voice of Dory the Royal Blue Tang fish, Ellen Degeneres has the most bots on her followed-by list. Of her 75.9 million followers, 48% are bots! She’s not alone with having almost half her followers made up of robots though. So who else made the list? Well the top 10 looks like this:

To be fair, this doesn’t mean celebs have been buying followers. Profiles with large followings will always attract a lot more bots than those with a more modest number.

Things heated up on The Bachelor Australia

It finally happened. The Bachelor finally lived up to the hype depicted in the episode trailers. There were C-bombs dropping here, there and everywhere, a sexual food fight and something that resembled a gladiator battle to the death, but for brides.

Honestly, how cute are Matt and Chelsie?! #TheBachelorAU

Also, Nikki is still in. Why is Nikki still in?

For our full recap of all things Bachie, head here.