James Charles is one of the biggest names in the beauty community. Rising to immense success in only 2 years, he’s now one of the most popular influencers in the entire world with over 16m (yes, MILLION) subscribers on his YT channel and the same on his insta.

But over the last day, that number has dropped by 2m and counting, after Tati Westbrook (who is arguably Youtube’s most respected beauty guru) ended him with a ‘spill’ video. 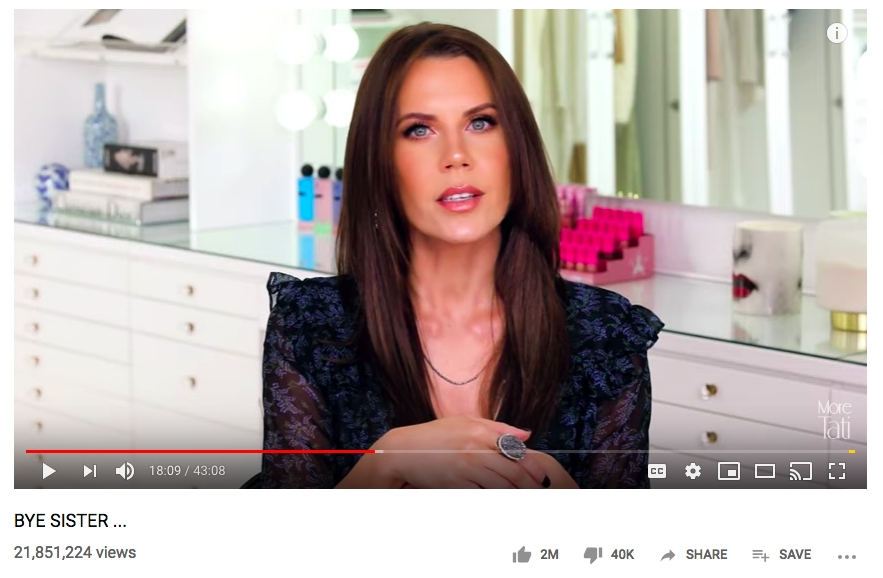 It all started a few weeks back when James Charles posted a #sp post on his insta stories, promoting that stupid gummy bear vitamin thing all the Kardashians promote. TBH I have no idea how that company still have enough money to pay for these expensive AF sponsorships, a Kardashian post alone is over $200k and they can’t be selling THAT many bloody hair vitamins surely!?

Anyway so Tati had actually released a range of hair vitamins last year and even though she’d always supported James and had him on her channel when he was new and unknown and supported his many collabs etc – he’d never supported her brand because he didn’t think it was ‘ok to promote vitamins to impressionable young people’. (The majority of his audience is 12-14yo girls). But he clearly didn’t have an issue if money and backstage Coachella tickets were being waved in his face; ergo gummy ad.

So Tati was crying on Snapchat about it and then some other wannabe beauty influencer got involved and then it all kicked off basically. I wasn’t really that deep, I saw it all unfold but wasn’t watching the drama channels or anything because TBH it didn’t seem that big of a deal. Until yesterday.

Yesterday Tati officially addressed the whole drama and completely cut ties with her beauty protégé, with a 43-minute video, titled, ‘Bye Sister’ (he famously calls his fans ‘sister’). At the time of this article going live, the video had over 21m views, with an absolute sea of support coming through from other influencers, while people shared their own experiences and issues with James Charles.

James then released the most pitiful attempt at an apology video where he fake cries and talks out of his ass for 8 minutes. He’s lost over 2m subscribers and reports say huge names like Jeffree Star, Kylie Jenner and Shane Dawson are on the list of people who have chosen to stop following him on social media.

I just love the drama of it all and am sitting here cheering for Tati. No one has ever called out another public persona in such an accurate, eloquent and respectful manner; while still completely destroying his credibility and ending his career. Gems like “How entitled do you have to be to think that you have it rough? You are a 19-year-old millionaire. You do not get to wake up and stress out about how unfair your job is. That is so ridiculous to me,” actually made me fist-pump the air.

What do you think about the whole thing? I know, I know, it’s kinda sad we care but a lil’ bit of boiling TEA is kinda my fave way to spend a Sunday… 🙈