Gotta love a good social media battle… it’s like those traffic accidents that the risk of crashing is so worth it just to get a good gawk. My all-time favourite has got to be when I saw a couple I was acquainted with go from constantly doing the “we are so in lurrrrrvvvveeeee” Instagram posts (*insert sick emoji*) to openly slamming each other. Like trolling to the max – we’re talking intimate details here, people. And then friends got involved. And then brothers and sisters. It was drama with a capital D and I for one could NOT put my phone down. It was better than an episode of Orange is the New Black (and that’s pretty heavy coming from el numero fan over here).

But while the above case definitely wins my gold trophy award for most fun to see played out across the world wide web – I’m equally as entertained when it comes to celebrity twitter/facebook/Instagram battles (does this make me a bad person?! #sorrynotsorry). It’s like a tennis match – watching as the ball goes back and forward while getting a smashing at each end. 🎾💣🙌

And some celebs just can’t seem to get enough of it, finding a new sparring buddy year after year. For all those who are with me and are strangely addicted to a good celeb social media feud – read on as we round-up some of our favourite repeat offenders when it comes to all-out raging wars…

Katy Perry, Kanye West, Kim Kardashian West, Calvin Harris… Taylor Swift sure aims high when it comes to some good ol’ fashioned online feuding. Taylor’s social media digs first begun to surface in 2014 when her and Katy Perry were spotted slinging a few sly comments at each other across the net. After an interview in which Taylor alluded to being “straight-up enemies” with a well-known musician, Katy tweeted this:

And then things got a bit nasteeee. With thinly veiled strikes continuing to this day.

But Katy’s not the only one copping the wrath of the princess of pop. There’s also the well-documented battle between Taylor and Kanye. After strong denial of knowledge about Kanye’s song lyrics “I feel like me and Taylor might still have sex / Why? I made that bitch famous”, things really heated up via social media when Kim Kardashian West released a Snapchat video of Taylor approving the lyrics. Awkward. The singer naturally took to Instagram to state her case.

Oh, and then there was last year’s twitter battle with ex-boyfriend Calvin Harris when the dj claimed Taylor’s camp had leaked information to TMZ about a song they had recorded together. Leading him to write these tweets: 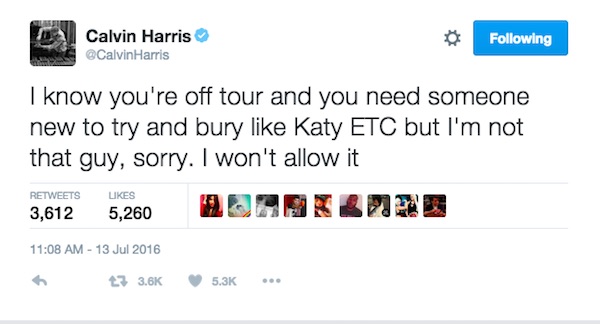 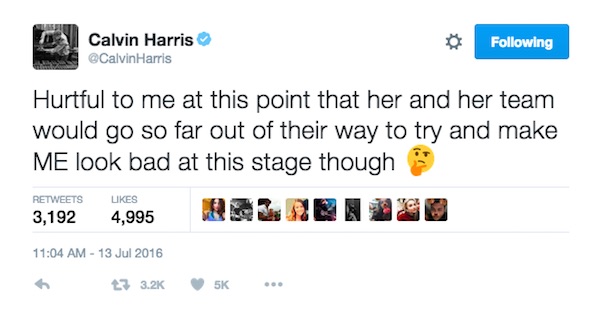 Taylor’s not the only repeat offender when it comes to online feuding. Iggy Azalea’s also a bit of a fan… While there’s been A LOT of rifts, here’s a little look at some of the best ones:

Rihanna’s been pretty quiet when it comes to social media rifts of late (although her fans did blow up when Chris Brown dared do the eye emoji on one of her recent Instagram posts), but the singer is no stranger to a few online beefs.

Like the time Azalea Banks got so maddened by a tweet Riri did about Donald Trump that she Instagrammed Rihanna’s mobile number (along with some comments), to which Riri responded by sharing some private messages from Azalea with a phone number clearly visible. Two can obviously play that game, Azalea.

And then there was that occasion Ciara told the E! Show that Rihanna hadn’t been nice to her at a party and this Twitter battle ran out…

C: ‘Trust me Rihanna you don’t want to see me on or off the stage.’

R: ‘Good luck with bookin that stage u speak of.’