Let us all take a moment to mourn the $190 loss my bank account took last week.  A $190 loss that will hopefully, at the very least, be tax-deductible after this review.

Sleep No More: An NYC ‘must see’, which heralds from the UK and is described as primarily being based on William Shakespeare’s Macbeth, with inspiration also taken from noir films, as well as some reference to the 1697 Paisley witch trials.

It’s an interactive, immersive theatre and dance performance, installed over six floors and 100 rooms at The McKittrick Hotel in NYC.

Critics and pretentious wankers all around the world have praised it for many years and after a friend told me it was a ‘must’ and that she’d been 4 times, I thought I’d give it ago.

I was also promised vast amounts of nudity and being the creepy perve that I am was excited about this.

This is what went down… 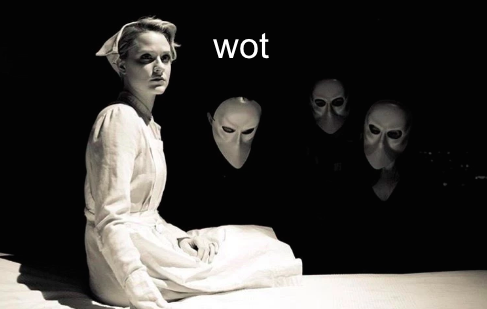 So would I recommend Sleep No More?

Unless you have lots and lots of money and would like to spend it on a truely baffling evening involving potential shlong sightings and riveting napkin folding. The sets were cool but given how dark it is, the likelihood of you missing most stuff is high.

I urge you to instead just come over and watch me. It’s free, I’ll turn the lights on, you won’t have to wear a beak mask AND I am 120%  certain I’ll get up to more interesting shit.