An office is a funny place.

Think about it; we spend a huge chunk of our lives cooped up for around 8 hours a day with a plethora of people that we are forced to get along with (even though you’d rather cut your left pinky off than deal with Karen from accounting in the real world). We’ve sussed out the 10 types of peeps you’ll generally encounter in every workplace, including the ones you have to constrain yourself from strangling on a daily basis.

There’s nothing worse than holding out all day for your expertly-crafted turkey and Swiss cheese sandwich, only to realise after a frantic search across the fridge that someone has devastatingly STOLEN your meal. In-fucking-furiating doesn’t even begin to describe this kind of person. The absolute audacity of someone to brazenly nick your meal is beyond me. An act so boorish not only leaves you hungry, it makes you angry. It makes you HANGRY, and hell has no fury like a hangry woman.

Rather than speak like a normal human being, these people like to use shitty buzzwords like ‘synergy’ and ‘ping’ and ‘under the pump’ and will ask you to ‘touch base’,  and to ‘take it offline’.
News flash: you sound like a cheesy PowerPoint presentation, stop that. 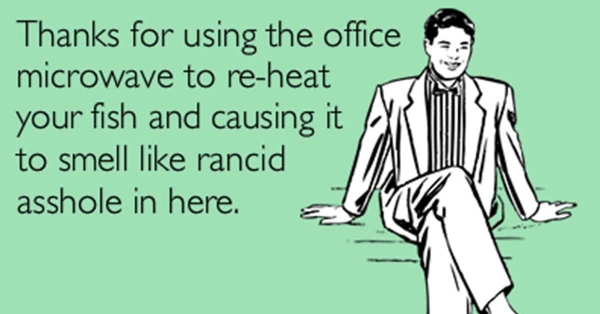 You don’t even need to see this person to know they’re around, cos you’ll smell it first. And by ‘smell’, I mean more of a ‘full-blown assault on the nostrils’. This type will constantly bring lunches that fkn reek, all while being blissfully ignorant of the disdain their putrid reheated fish is causing for everyone that’s unlucky enough to be within its stinky radius.

We’ve all been this person at one point in life, tbh. To be fair, lunch is usually the one part of the day that we look forward to, and probs the only thing holding us together for the first half of the working day. These kinds of people will always ask what you’re having for lunch and pride themselves on being in the know about the best place to get a cracker of a sanga.

Every workplace without fail will have at least one of these. They’re the first to know what’s going on in everyone’s personal lives, and won’t hesitate to tell anyone within earshot about the latest ~hot goss~. While they’re usually good entertainment since they have a lot of stories, beware of telling them anything salacious about yourself, unless you want everyone else knowing about the time you threw up on the DF while drunk in the city. 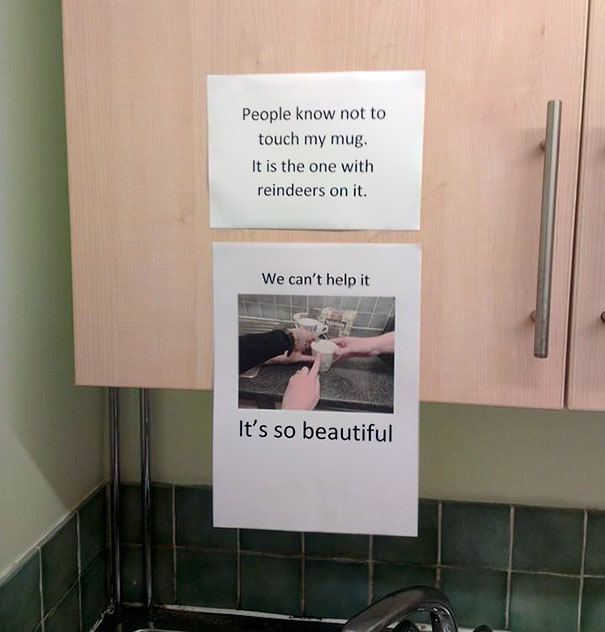 Rather than approach any issues with fellow co-workers in a mature way, this person instead prefers to leave passive-aggressive messages on post-it notes every time something pisses them off. The note writer’s biggest office enemy is the lunch thief, who when targeted by said food bandit will leave notes like “Unless your name is Dave this is not your lunch.” They can also be seen leaving signs around the office accusing everyone else of being selfish and inconsiderate. Bonus points for the ones that loudly declare how big a workload they have or how they’re always the last to leave the office.

Their workspace is cluttered with shit like week old plates, unwashed cutlery, assorted stacks of paper and other random items. They’ll also leave mouldy food in the fridge, and they’ll be damned if they’re stuck cleaning up the melted cheese caked to the bottom of the microwave thanks to their burrito lunch.

They’re the young go-getters who are up for anything. Need a coffee? They’ll grab it. Need someone to file old paperwork? Done in ten mins. Great right? Totally… That is until you’re dusty AF after wines with the girls last night and the intern won’t stop hassling you for new tasks for you to give them, and frankly you just don’t have that kind of brain power today.

You should probs get some headphones rn, ‘cos these guys will have you on the verge of snapping with their incessant pen clicking, finger cracking, humming and loud chewing. Oh, and their snacks will ALWAYS consist of something unnecessarily crunchy, like chips or apples.

While they’re rarely seen without earphones in, half the time they’re not even playing music. Rather, they’re used as both a way to drown out inane chatter while they’re working, or simply a guise so everyone leaves them the hell alone and doesn’t talk to them.