Hi everyone, welcome back to my channel.

Wait, that’s not right. I think I’ve watched too many tea spill videos and it’s starting to affect my basic comprehension skills. Anyway, moving on. In case you were busy enjoying the glorious weekend we just had and forgetting all your woes, let me remind you, we are currently in the midst of the biggest YouTube feud of all time. Dramatic? I think not.

Cast your mind back to last week when beauty guru Tati Westbrook dragged TF out of James Charles and slung some pretty massive accusations his way.

The TLDR of the situation is this

James was partying at Coachella a few weeks ago and could only get VIP tickets and not those super lucrative artist tickets Gigi Hadid and Kendall Jenner swan about with (forgive me if I don’t shed a tear). The crowd swarming James was getting a little too much to handle so he reached out to Sugar Bear Hair and offered an Insta Story in exchange for artist tickets. Ah, the influencer economy, what a world we live in.

On the surface, this is no biggie but his BFF and ‘mother’ Tati has her own hair vitamin line and Sugar Bear Hair are her number one competitors. See the issue? Flash forward a few weeks and Tati publicly called him out for being a shitty friend and detailed some seriously problematic interactions between James and some other young lads. It wasn’t good. The internet piled on, Jeffree Star got involved, James issued a very awkward apology and lost 2 million subs in the process. Case closed, right? Wrong sister.

James has since uploaded a 41-minute long vid where he checks the receipts and makes a total shitshow of the “misinformation” being reported on.

The 19-year-old beauty vlogger starts off by standing by his original (and piss weak tbh) video saying, “everything I said in that video in regards to my sentiments towards Tati and my apology, I stand behind one hundred per cent”. But maybe he needs a dictionary because then James goes in on Tati and countless others who have made public comments in the post-Bye Sister-era.

Now there is a lot to break down in this video so let’s take it in baby steps.

His response to those accusations

At the crux of the story is a guy named Sam. Sam is a waiter from Seattle who worked Tati’s birthday dinner. James and Sam apparently hit it off and later ended up at James’ hotel for some Netflix and chill. Now according to Tati and Sam, James pressured him into exploring his homosexuality. However, the screenshots tell a slightly different story. 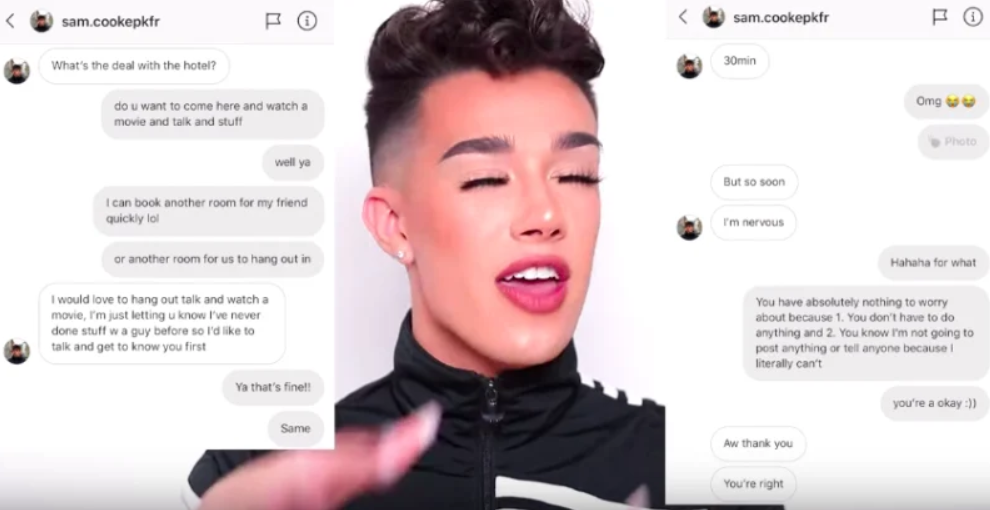 The screenshots added some context to a DM James had sent Sam after the fact saying “You’re not straight no matter how many times you tell yourself”.

James clarified what the situation had to do with Tati and her husband who told him he shouldn’t get involved with “curious guys” because it would get him hurt or someone would twist the story – which of course is what James is now accusing Tati of.

James wants you to know he is ‘so famous’

One of the reasons the James/Sam interaction has the potential to be so problematic is because of the power imbalance between the two of them. In Tati’s video, she says James used his fame and celebrity to manipulate straight men. It’s worth noting this is a claim James very strongly denies.

“I am a 19-year-old virgin. I have never and will never use my fame, money, or my power to manipulate or get any sexual actions from a guy. That is disgusting. That is not me. The fact that Tati brought this up blows my mind”.

James also takes issue with Tati dragging him for calling himself famous, claiming it’s an inside joke she and all of his other friends use on the reg. 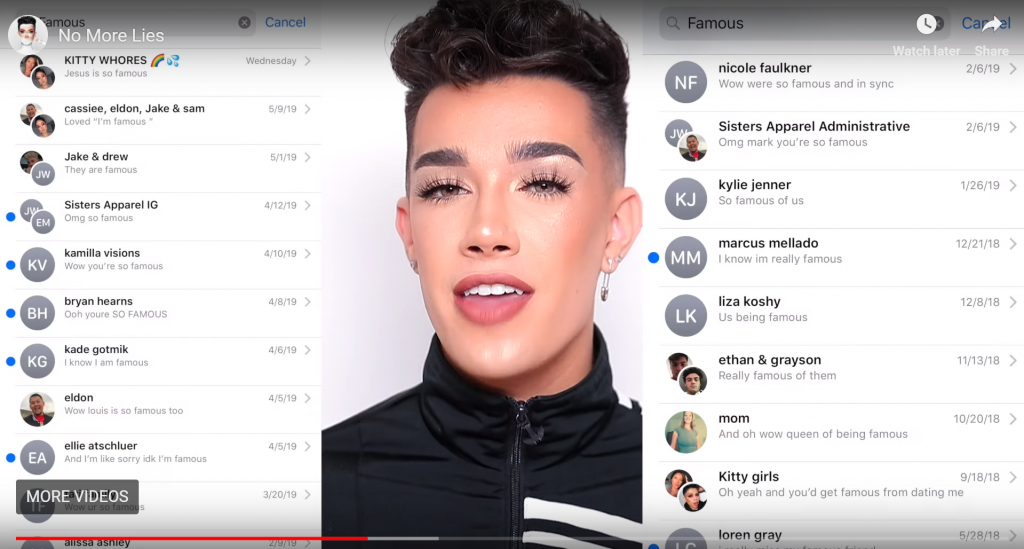 It’s good James took the opportunity to address the claims but absolutely no one is missing his not-so-subtle humble brag about having Kylie Jenner’s personal number.

James is taking notes on board

In my humble opinion, the best part of the video is when James refutes Sam’s claims and then goes on to address Sam’s comments about his..uhhh…technique.

According to trusty old Sam, James is “the worst kisser ever” and uses way too much tongue. Harsh. James took the dig in his stride though saying he’ll make an effort to keep in mind the future. To be honest, I cannot imagine how I would feel if my teenage kissing technique was discussed on the internet. How that wasn’t enough for James to sign off forever is beyond me.

Why TF is Zara Larsson involved?

After Tati’s video went viral, a slew of DMs started to hit Twitter feeds, some fabricated, some not, accusing James of purposely seeking out straight guys. One such critique came from pop star Zara Larsson who tweeted saying James had slid into her boyfriend’s DMs “knowing damn well he is straight”.

James addressed the comment saying that he only ever sent him a compliment and called out Zara for having “double standards”. Below for context, is how Zara Larsson met the boyfriend in question. 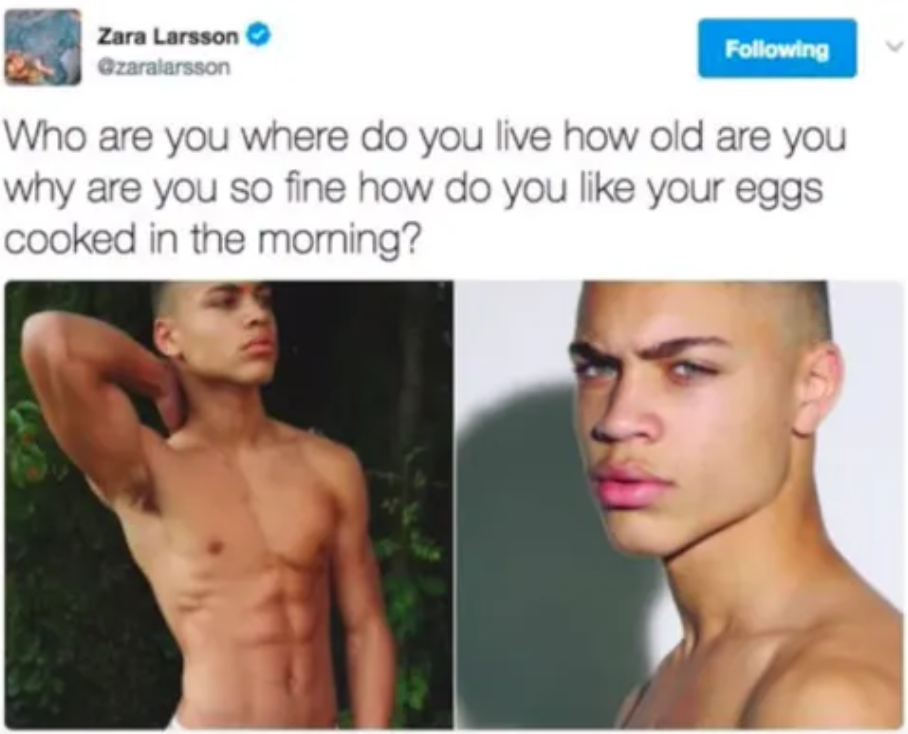 Yup on Twitter and not even in a DM, on the feed no less!

Where does Jeffree Star fit in?

After sending a series of scathing and cryptic tweets about the feud, James Charles is not letting Jeffree Star get off scot-free.

Jeffree had called James a menace to society, said he needed to be in prison and to add insult to injury, pulled his merch line (Star’s company controlled the merch). Star also sent Charles some absolutely heinous text messages. 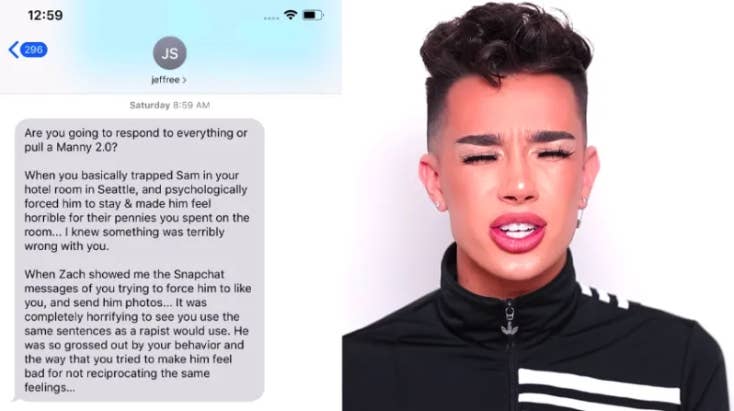 James said when his merch does go back on the market it definitely won’t be through Jeffree Star and the text above is the predominant reason why.

Tati’s two cents on the video

So how did James’ new vid go down with Tati? Not well as I’m sure you can guess. 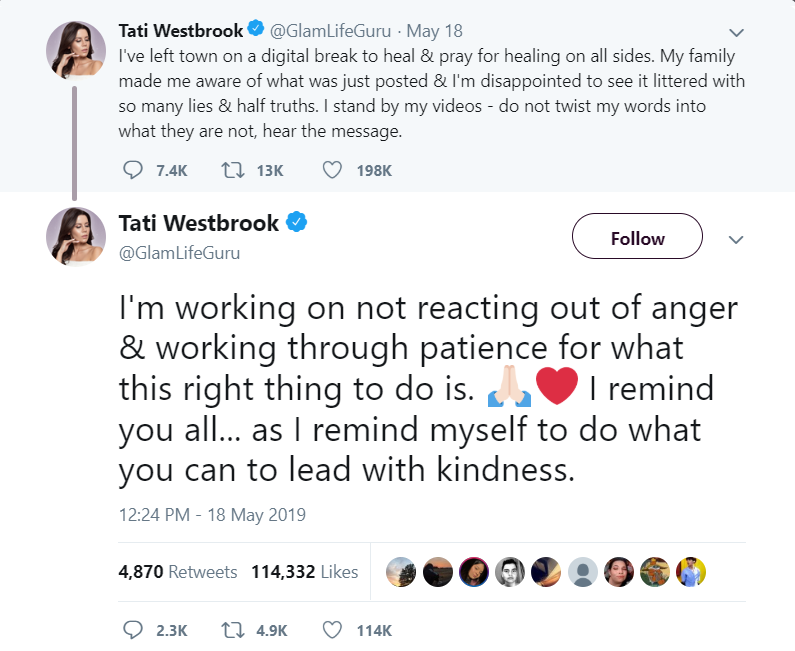 Jeffree Star, however, had a different approach. In classic Star fashion, he released a video to give his take on the drama. Except that’s not what it was. Instead, it was 13 minutes of Star saying he regrets getting involved, is upset with himself for speaking without thinking among other post-fight cliches that don’t take 13 minutes to vocalise. It’s a very boring watch and tbqh, Twitter is not having it.

James Charles at Tati and Jeffree Star when he uploaded his new video pic.twitter.com/0aceqn4uTF

James, Jeffree, and Tati by the end of this damn week pic.twitter.com/Xde97vRwBl

Will we ever have anything else to talk about?

Yes! The James and Tati both took to Twitter for a final time while this article was being written to officially call a cease-fire.

Thank you @jeffreestar & @glamlifeguru for your sentiments. I am on board to move on, will not speak about this further, but do hope to speak in the future when we’re all ready. This week was awful for all of us and I ask that the community focuses on positivity moving forward ❤️

Thank God for that.