We’ve ALL experienced some sort of fashion faux pas at some point in our lives (the early 2000s were a strange time for everyone), but these following celebs are regulars on the worst-dressed list, and should probably consider kicking their stylists to the curb over these shocking fashion fails… 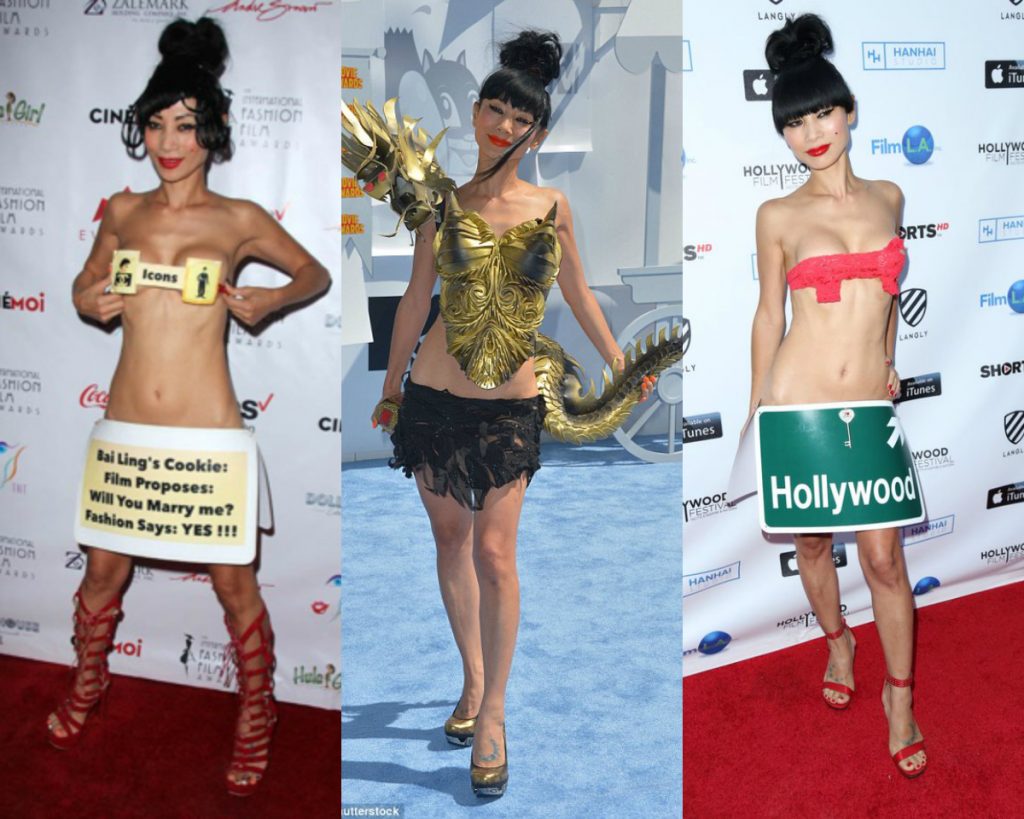 She’s known for her flesh-flashing red carpet ensembles, but actress Bai Ling doesn’t really give an eff what her critics think of her bizarre fashion choices, with the kooky star’s style seemingly getting more outrageous.

Look, we’re all for embracing your own ~aesthetic~ and all that jazz, but srsly, how does she not live in morbid fear of having a major wardrobe malfunction with these weird AF get-ups? 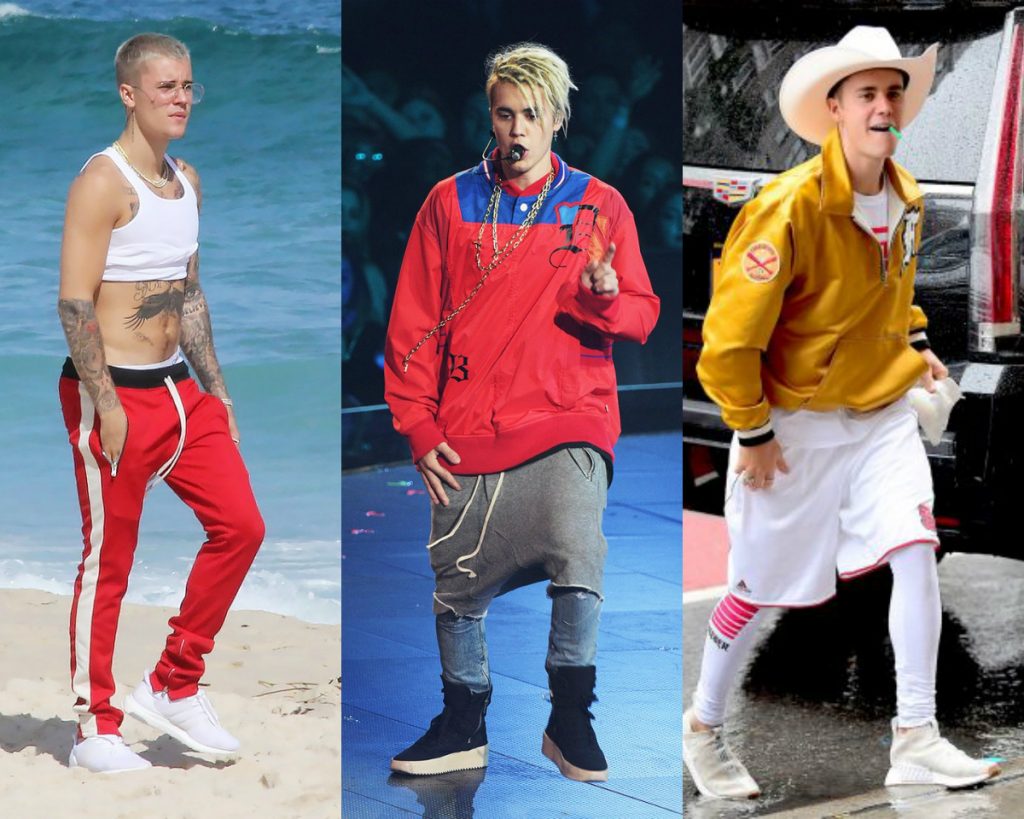 We’ll admit that his outfit choices aren’t all bad, but crop tops, cowboy hats and drop crotch pants (aka poo-catchers)?! C’mon, Justin, get it together dude.

We don’t know what the Canadian pop star was smoking the day he put these monstrosities together and thought, “Yeah, this is a banger of a look,” but we are not here for it. 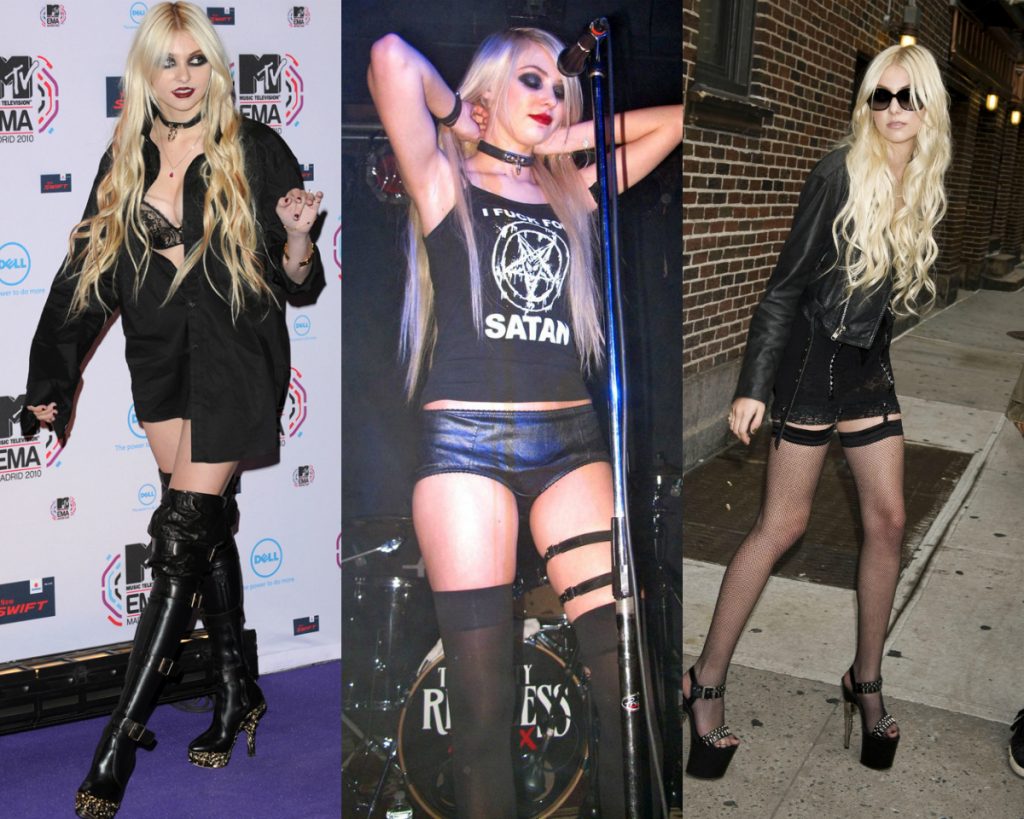 Coincidentally, much like her character Jenny Humphrey on Gossip Girl, Taylor Momsen’s look changed from innocent-girl-next-door to gothic call girl pretty much overnight.

After ditching her role on the show that catapulted her into fame, Tay’s look did a massive 180, with her wardrobe staples consisting of stripper heels, garters, and what we imagine to be a half the world’s supply of black eyeliner. 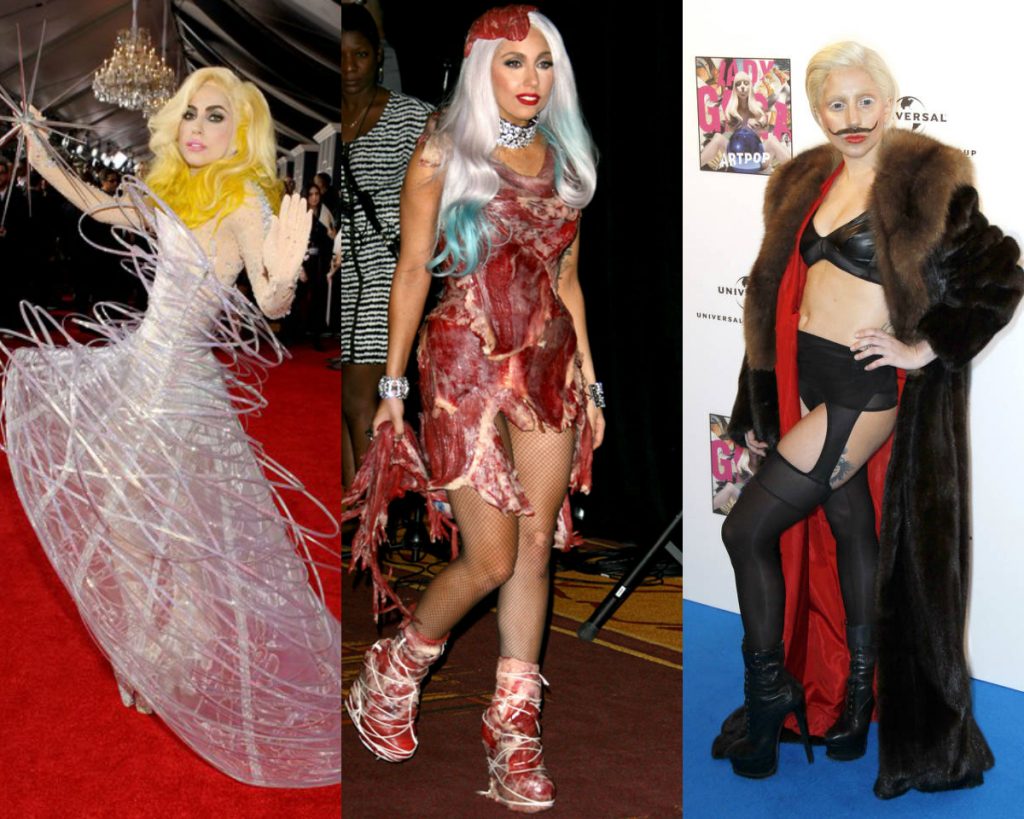 We’re used to seeing Lady Gaga rock some really fkn outrageous getups in her time, but tbh we still haven’t really recovered from the time she wore a MEAT DRESS to the 2010 Video Music Awards.

Could you even imagine the smell that whoever had to sit next to her would have dealt with?!

Yeah, we’ll stick to our meat-free fashion, thanks. 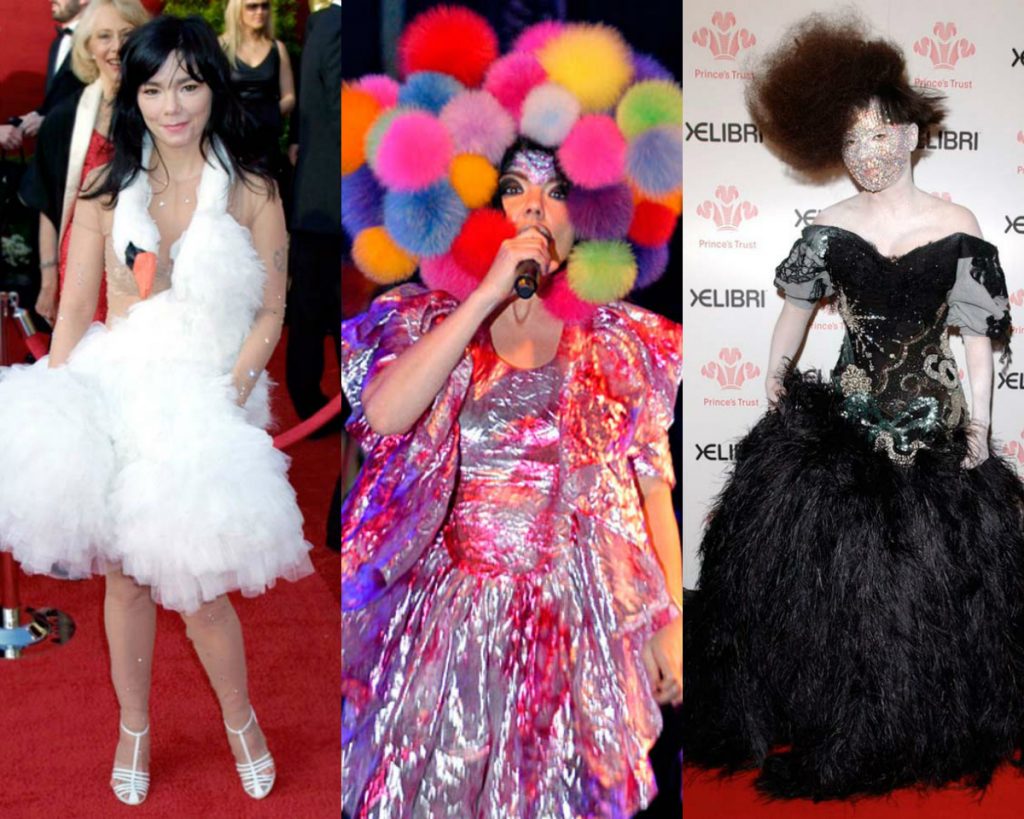 There’s no doubt she’s creative, we’ll give her that – but there’s no denying that Icelandic singer Bjork definitely leans to the more eccentric side of things when it comes to choosing a red carpet look.

I mean, who could forget the infamous swan tutu dress she wore to the 2001 Academy Awards?!

What’s even creepier than looking like you have a dead swan wrapped around your neck is the fact that that’s not even her strangest ensemble. 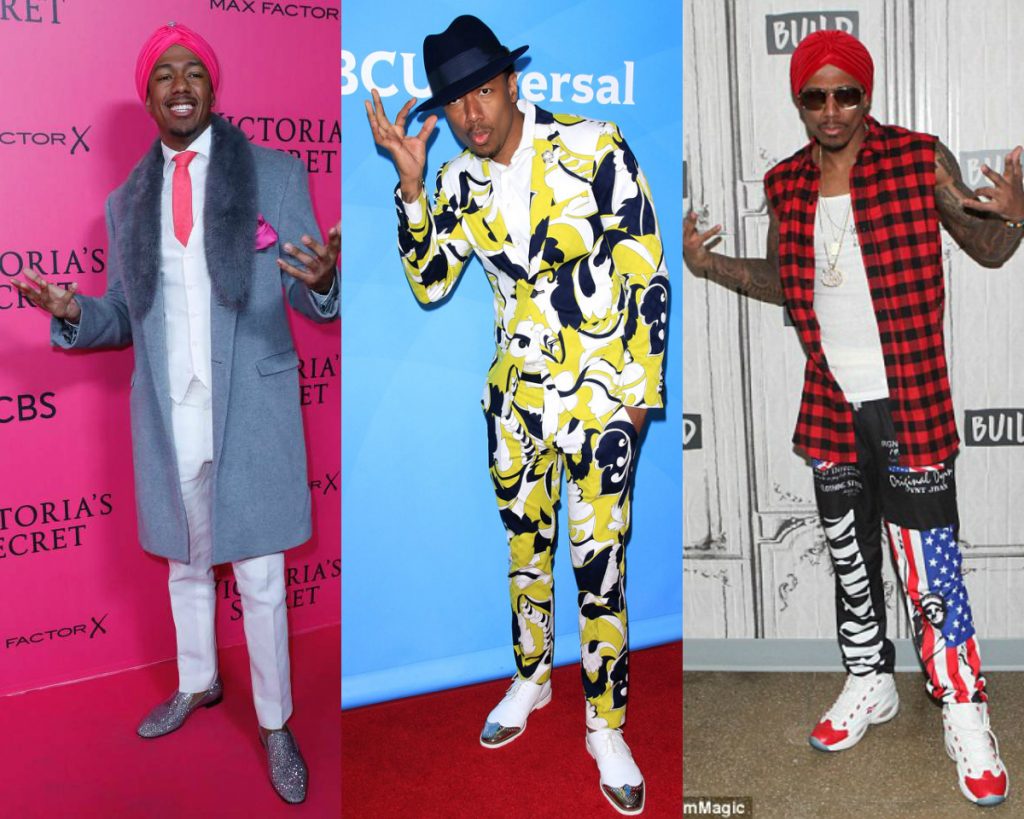 What is going on with those American flag pants? Why is he wearing a turban and a fedora? We have sooo many questions for you, Nick Cannon.

Maybe being married to fellow OTT-outfit lover, Mariah Carey, rubbed off on the American Idol host… 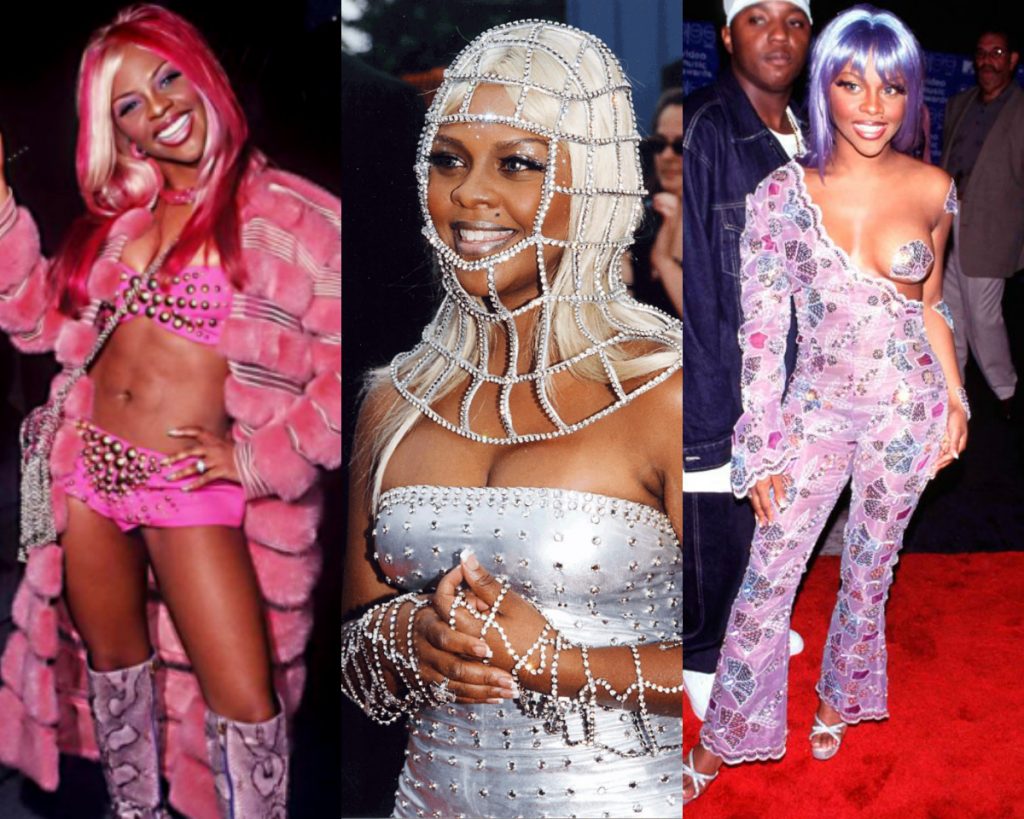 With outfits almost as shocking as her ever-changing face, Lil’ Kim is definitely up there when it comes to WTF fashion. She’s big on the idea that ‘less (clothes) is more’, and is rarely seen without wearing something that’ll turn heads.

With her countless wacky outfits spanning over two decades, at least you can say she’s consistent. 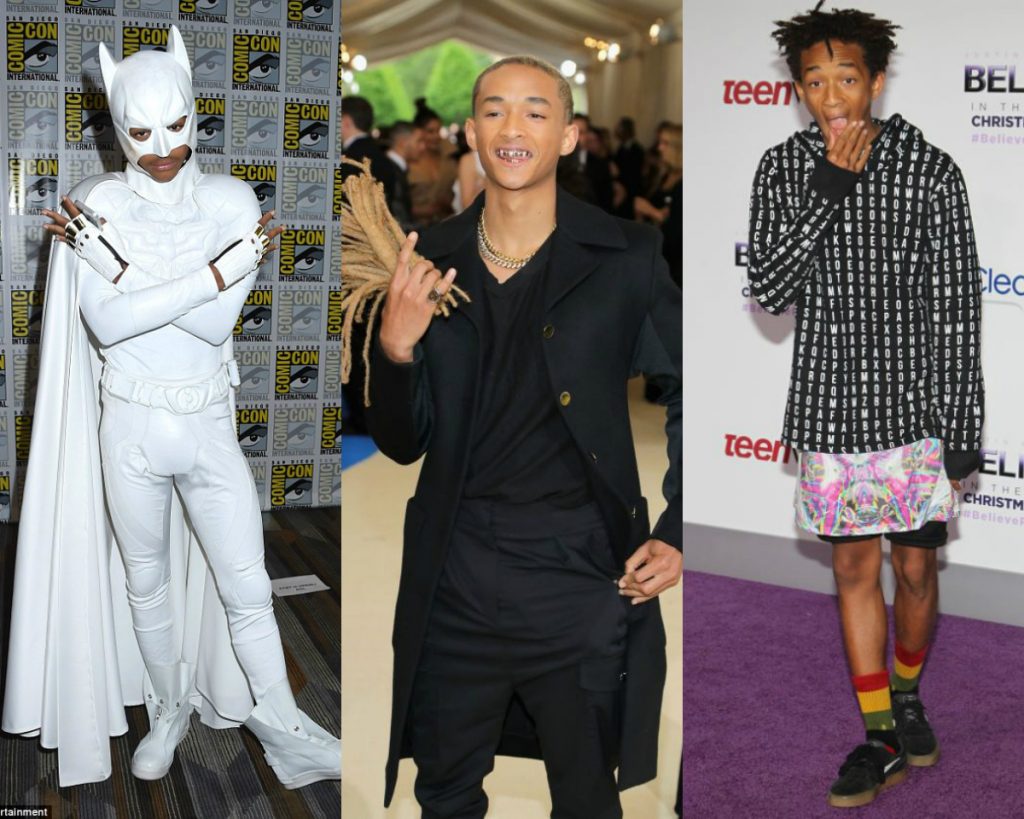 We get that he’s trying to be all eccentric and ~farshun~, but taking your own lopped-off dreadlocks as some sort of avant-garde man bag as Jaden did to this year’s Met Gala, it kinda goes way past being labelled a statement accessory and into the realm of just plain weird/gross.

Also, remember when he wore that all-white Batman costume to Kim Kardashian and Kanye West’s wedding? Seriously, WTF was that?

How To Style A Maxi Dress

Christmas Outfit Ideas: What To Wear For The Holiday Season