You’ve definitely seen these types on your feed. They’re usually a pretty Instagram chick in their mid-20s that’ll go by the name ‘HealthyRawFoodGuruGal’ or something equally vague.

They’ll upload their acai bowl breakfast every morning without fail. They’ll say words like ‘toxins’, ‘raw’, ‘stripped’ or ‘detox’, but not really know what they mean. They’ll post a daily yoga pose in front of a sunrise with the tag #SeizeTheDay, and they’ll try to convince you that dairy/carbs/meat and grains are ‘poisoning your body’.

Let’s be real. It’s great that their particular diet has worked for them, good on them. But when these ‘grammers start to dish out unqualified advice and convince their followers to drastically cut out food groups from their diet, it can be legitimately dangerous. If you insist on trying it out, ALWAYS run it past by a doctor first, it’s just common sense ya know?

Claiming to have ‘food allergies’ when they don’t…

We get that some people are totally grossed out by mushrooms ‘cos they’re rubbery, or not eating fish ‘cos it gives you a headache. Understandable, right?

But saying to a restaurant that you’re ‘allergic’ can create problems for those who could genuinely die from anaphylactic shock when coming in any kind of contact with a certain food group.

If you say you’re allergic to seafood but don’t have gradual swelling, difficulty breathing, wheezing, sneezing, and trouble swallowing – then soz darl, you don’t have an allergy, you’re just a fussy eater (or have an intolerance, which again, is totally different).

This behaviour has apparently become such a problem one Sydney chef blasted these picky eaters, demanding they “sort their shit out” since it makes it hard for people with actual allergies to dine out, and we agree!

Can people with dietary requirements start knowing what you can and can’t eat? Shellfish allergy but loves oyster sauce. Gluten free but loves gluten as long as it’s not a piece of bread. Vegetarians that love a chicken wing. Pescatarians who eat chicken. Sort your shit out and let your waiter know. You make it really damn hard for people with actual allergies and dietaries to go out to eat.

We were just having this discussion the other day in the Showpo office.

Our Content & PR Manager Kelly M was drinking a Red Bull for a bit of a pick me up, when our Email Marketer April shot a judgy look and dropped a smug, “You know… that’s not good for you…” before Kel hit back with, “Well neither is the shit you fill your body with on weekends but that doesn’t stop you.”

All office banter aside, though, she’s right. How often do we see all these holier-than-thou peeps on our newsfeed claiming to be ~enlightened~ over their new organic raw vegan toxin soy-free antioxidant diet and judge your barbaric meat-eating ways only to catch them chain smoking darts out at night?

As they say, people in glass houses shouldn’t throw stones.

This one is a major pet peeve of mine.

Not just because we all know you’re lying and have slipped up before because we’re all human.

And not just because they think they’re literally the picture of health and everyone should worship the clean-eating ground they walk on. It’s because any young girls who idolise these so-called ‘health gurus’ will think that if they try to improve their diet, and then ‘fuck up’ their ~flawless~ week of eating by hitting up a Snickers bar, then they’ve failed. 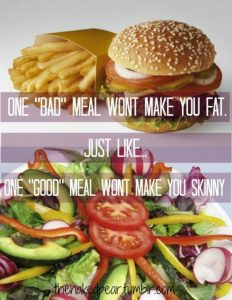 Putting vegetables in food that should not have vegetables…

Our rule of thumb here is that once you substitute ingredients in junk food with a completely different ~healthier~ option, it ceases to be said food.

By all means, if you enjoy the idea of ice cream made from avocado (WTF), then go for your life, but don’t call it ice cream, ‘cos you and me both know it isn’t ice cream, and that it’s nowhere near as delicious as the real thing.